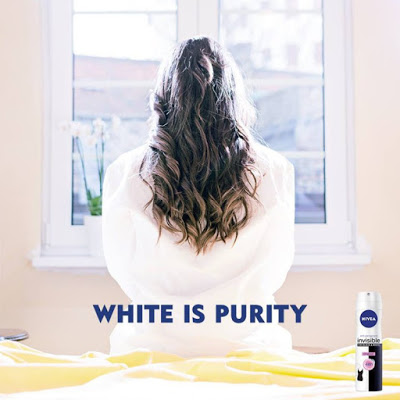 Nivea, a global brand has come under serious criticism following a deodorant advertisement it created with the payoff “White Is Purity.”

The brand is currently being accused of racism, as the advert has been translated to be insinuating that the white race is more supreme.

The “White Is Purity” advert features a woman with wavy tresses tumbling over an all-white outfit.

Since the advert meant for the Middle East was posted on Facebook, it has attracted condemnation due its alleged insinuated message.

Comments and reactions have been pouring in too; as one of the critics of the brand wrote thus “This is horrendous. Your comments are FULL of society’s refuse. This cleared your marketing department?”

Interestingly, the advert has been endorsed by alt-right and white supremacist groups.

More comments can be found below. 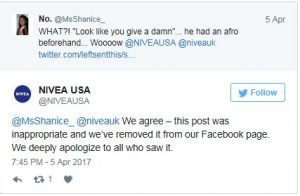 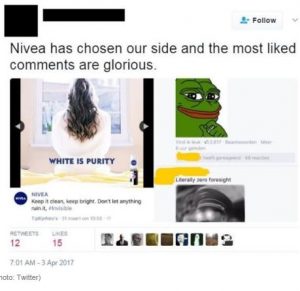 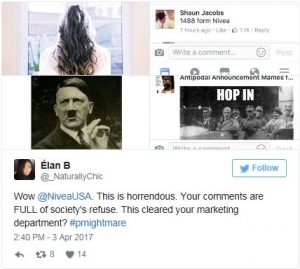 This won’t be the first time Nivea would be accused of racist marketing. In 2011, the company ran an advert for its Nivea Men line featuring a black man tossing a black head with an Afro along with the tagline “Re-Civilize yourself.” 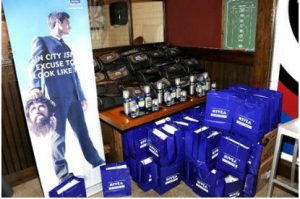 The Re-Civilized yourself  advert was described by Adweek.com thus

“Oh, those uncivilized black people—when will they get with the program? Perhaps they should try Nivea’s grooming products! That’s the message of the “Re-Civilize Yourself” Nivea ad above, as a black man brandishes the large-afroed, disembodied head of his former, uncivilized self and prepares to give it the old heave-ho. The image isn’t going over well, particularly with those who think the head kind of looks like Cornel West. There is a white-man version (see below), but there’s no talk of re-civilizing him. (His ad reads, “Sin City isn’t an excuse to look like hell.”)

According to Adweek.com, a person close to the situation said the “Re-Civilize” ad ran only once, as part of an advertorial in Esquire. Then, using the Twitter handle Ms. Shanice tweeted thus “WHAT?! “Look like you give a damn”… he had an afro beforehand… Woooow.”

The latest advert is more in your face, as the company using its Twitter handle @NIVEAUSA accepted such was inappropriate tweeting thus “We agree this post was inappropriate and we’ve removed it from our Facebook page. We deeply apologize to all who saw it.”

The company has since pulled the “White Is Purity” advert off Facebook and issued a statement saying, “That image was inappropriate and not reflective of our values as a company. We deeply apologize for that and have removed the post. Diversity and inclusivity are crucial values of NIVEA. We take pride in creating products that promote beauty in all forms. Discrimination of any kind is simply not acceptable to us as a company, as employees, or as individuals.”

However, poser as to how the advert got the nod of approval has been asked. Questions such as how did the advert get on a platform such as Facebook without someone approving of it has surface, as the fact that someone has to take responsibility has been raised.

The probability that the brand might suffer a backlash in terms of a global drop in patronage from the black race including Africans and African-Americans remains to be seen.

Related Topics:slideshowWhite Is PurityWill Africans Join The Nivea Backlash?
Up Next