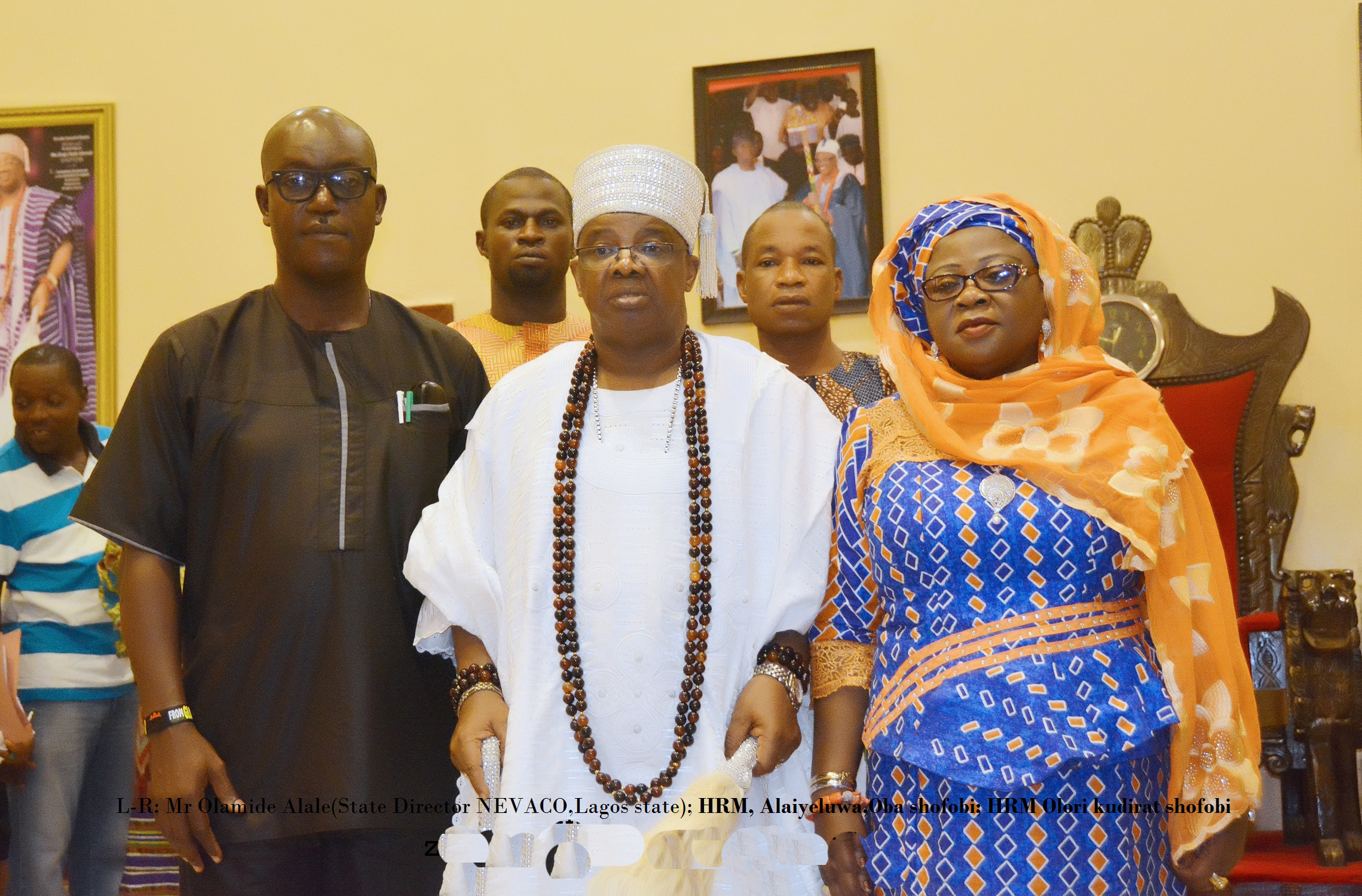 The Oba of Ikorodu, His Royal Majesty Alaiyeluwa Oba Kabiru Adewale Shotobi, Adegorushe, the 5th, has given full backing to newly established National Ethnic and Values Compliance Office (NEVACO).
The Oba, during the week, received officials of the agency on a courtesy visit to his palace, led by the Lagos State Director, Mr. Olamide Alale and other members of the Lagos chapter of NEVACO.
During the visit, Mr. Alale highlighted the aims and objectives of the newly established government agency and spoke on its operability throughout the 36 states of the federation, including Federal Capital Territory (FCT), Abuja.
He noted that NEVACO is agency under the presidency, which aims at correcting wrongs in the society and ensuring that people obey the laid down rules and regulations in the society.
He said, “NEVACO is divided into three section, Commodity Exchange Programme, Training and Manpower Development and NECOM force. On the Commodity Exchange Programme, the agency will work in collaboration with Ministry of Agriculture to ensure the increase in farm output in the country.
“This has to do with getting commodities produced in certain areas to where they are mostly needed. For instance, tomatoes in the Northern part are taken to the South-South and a particular produce from South-South is taken to the North.
“Farmers in the past complained of their farm produce rotting away due to poor storage facilities and poor market for the produce, but NEVACO is here to increase their output because NEVACO is ready to assist them from planting to harvesting.”
He noted that the target of NEVACO is to empower farmers, through the Commodity Exchange Programme, saying that the agency is targeting about 1,000,000 people by the end of 2019.
According to him, in Training and Manpower Development, under this programme, NEVACO will train workers in both public and private sectors on ethics and values.
“NEVACO is all about training people to ensure increased efficiency, when it comes to working with core values and ethics. It trains people to improve efficiency in schools, hospitals, financial institutions, military institutions, federal, state and local government institutions, NURTW, RTEAN and artisan association among others,” he said.
However, the Royal Highness in his reaction, Oba Kabiru Adewale Shotobi, applauded the establishment, saying it was a good idea in the right direction, advising the people not to lose hope in the project Nigeria.
He said, “I’m very much interested in this agency and you can count on me anytime to give maximum support in any capacity you may deem fit. You can consider me a honourary member of NEVACO. My people in Ikorodu and I, will do everything possible to ensure that NEVACO is successful.
“I want this interactive section take place, at least, four times a year in order for us to continually exchange ideas on how to move the nation forward,” he added.
Others present at the meeting include, all the Obas in council, Iya loja of Ikorodu and her executives, NURTW and members of the corporative society among others.
Post Views: 724

Is Diezani Alison-Madueke Fighting Back?

Mary Akpobome Step Out In Monochrome