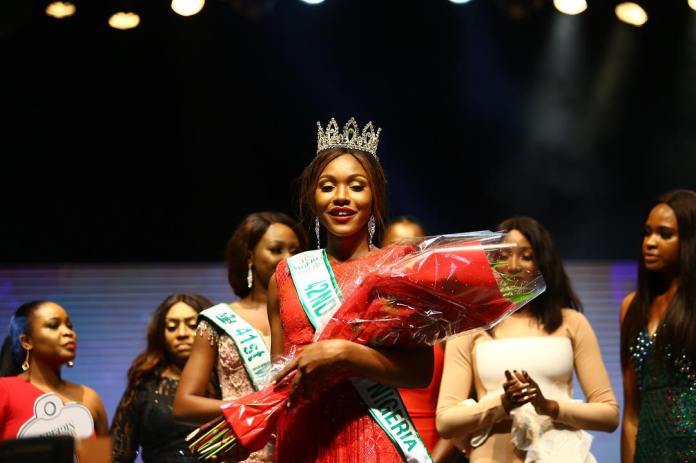 Chidinma Aaron hugged fame on Sunday, November 25, as she emerged the 42nd Miss Nigeria in a colourful event hosted by Ebuka Obi-Uchendu and Kaylah Oniwo.

Competing against 17 other finalists who boasted great features and finesse, Aaron, who represented the South Eastern zone of Nigeria was unanimously declared winner at an event, which held at the Convention Centre of Eko Hotel and Suites, Victoria Island, Lagos State.

Representing the regions of Nigeria, the contestants initially stepped out in green dresses, but later returned in traditional attires and evening gowns to the delight of the audience present.

Following a question and answer session, Aaron emerged winner of the pageant amidst applause from both the judges and audience.

Stepping into the shoes of the out-gone queen, Mildred Ehiguese, Aaron smiled home with N3million, a luxury apartment and an automobile; while Dunu Chisom and Ameh Munirah followed as first and second runners up respectively.

All Eyes On Niyi Makanjuola

The Aura Of Khadijat Abdullahi-Iya