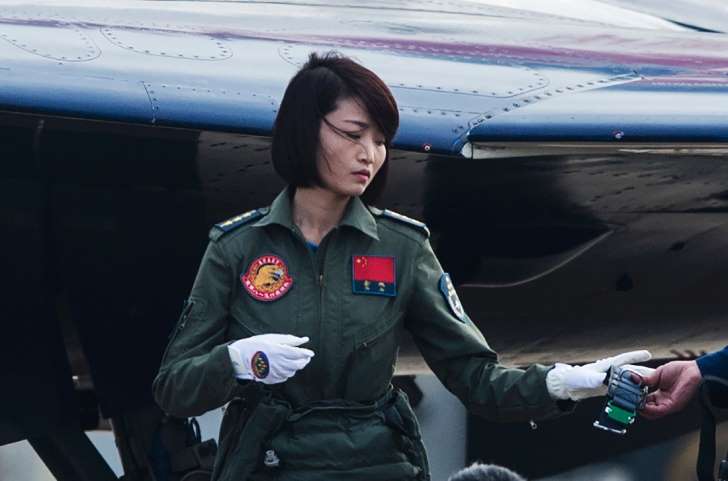 The first woman to fly China’s J-10 fighter plane was killed in a crash during an aerobatics training exercise, state-run media reported Monday.

Yu Xu, 30, a member of the Chinese air force’s “August 1st” aerobatic display team, ejected from her aircraft during a training exercise in the northern province of Hebei at the weekend, the China Daily newspaper said.

She hit the wing of another jet and was killed, it said, although her male co-pilot ejected safely and survived.

“As one of only four female pilots in the country capable of flying domestically made fighter jets, her death comes as a tremendous loss to the Chinese air force,” the Global Times newspaper said.

Yu, from Chongzhou in the southwestern province of Sichuan, joined the People’s Liberation Army (PLA) Air Force in 2005, reports said.

© Provided by AFP Yu Xu was a member of China’s “August 1st” jet aerobatic squadron She graduated from training four years later, one of the first 16 Chinese women pilots qualified to fly fighter jets, the China Daily said, and in July 2012 was the first woman to fly the J-10. Fans dubbed her the “golden peafowl”, it added.

Yu was seen as a pioneering trailblazer in a country which enshrines women’s rights but where traditional values are still widespread.

Users on the Twitter-like Weibo social media service posted pictures of candles in her memory, with thousands mourning her death.

“We praise her not as an individual, but for the spirit she transmitted to us, becoming the ideal vehicle for everyone’s hopes,” wrote one user.

Others raised questions about the crash. “Rather than stirring up emotion, the most important thing is to investigate why this accident occurred, was it a problem with the design problem in the fighter, or in the rules of operation, or in inadequate training,” wrote one.

“Only by ascertaining the causes can we ensure it doesn’t happen again.”

Yu rose to become a flight squadron leader and according to the Global Times dreamed of becoming an astronaut.

She was one of two female members of the August 1st team — named for the date of the founding of the PLA — pictured at China’s premier air show in Zhuhai two years ago.

The pair strode to their fighter planes in lock-step with male pilots, all wearing identical green jumpsuits and sunglasses.

“It means the air force has diversified its pilot pool and can recruit more female pilots.”

Yu appeared again at this year’s show earlier this month, according to reports.

The J-10 is a workhorse of the Chinese air force. Two of the fighters conducted what the Pentagon called an “unsafe” intercept of a US spy plane over the East China Sea in June.

An estimated 400 of the jets have been built, most for Chinese use, according to defence analysts IHS Janes. It said in December reports had emerged of three crashes in the previous three months.

Related Topics:First woman to fly China's J-10 fighter killed in crashmember of the Chinese air forceslideshowYu Xu
Up Next

Quilox needs to stop getting high on its own supply