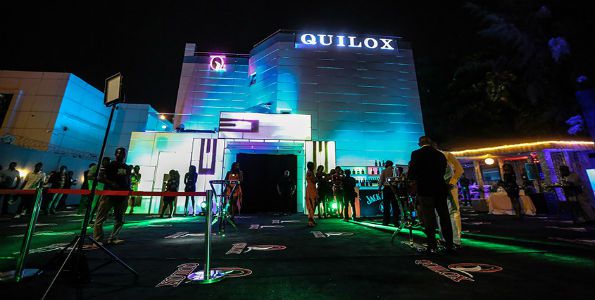 To paraphrase Nigeria’s Minister of Finance Kemi Adeosun, recession is just a word – at least for the owners of Quilox. A bottle of Hennessy XO goes for N110,000. A one-litre pack of cranberry juice is N2,800. That N50 bottle of water you buy in traffic costs N600 in Quilox. And brothers and sisters, their market is selling.

Every day is like New Year’s Eve – sold out and packed full. The loyal client base who defy country wide financial recession ensure that Quilox is always flushed with cash – so much that it can afford to close down for a whole month during Ramadan.

Needless to say, Quilox is the hospitality capital of Lagos. Shina Peller, who owns and runs the club learnt the art of showmanship well from his father, the late magician Professor Peller. He has combined showiness with a remarkable attempt to sate the never-ending thirst Lagosians have for a good time and created a truly luxurious hospitality brand.

So exactly how big is Quilox? Well, in terms of geography it stands astride several plots of land in the heart of Victoria Island. Peller puts the value of his establishment at a billion naira . In terms of reputation, it is the holy grail of the nightclubbing experience in Nigeria. Lagos governor Akinwunmi Ambode was rumoured to have been spotted there shortly after he took office. His handlers denied it but those who saw him swore that it was indeed him. Quilox has seen a patron spend over N11m in one night. Ghost from the television series Power would be proud.

Quilox is also big enough not to particularly care about bruising the ever so fragile ego of our celebrities. Yes, their patronage would be nice but if it would interfere with the lau-lau spending of regular jocks, they’ll be shown the way out. On a night that M.I Abaga was taking too much time to complete his set, his mic was turned off and the resident DJ cued his own music. That was almost two years ago and it hasn’t impacted the club negatively.

Apparently, Quilox is also big enough for its bouncers to pounce on another popular artiste, Oritsefemi, and give him the beating of his life; not figuratively. Over the weekend he was beaten up, beaten down and beaten black and blue. According to eyewitnesses, the musician cut one bouncer with a glass cup on the face and that infuriated the other bouncers, who then descended on him to give him the ass-whooping of his life. One could argue that Oritse had that one coming and that was the price of his stupidity.

READ: ‘Oritsefemi came without prior reservations, beat up our bouncer and pretended to collapse’ – Quilox

However, Quilox is slowly earning itself a bad rap that might make it head for extinction quicker than the owners imagine. In the three years that it has been in existence, it has been the site of a few skirmishes that undermines the façade of extreme luxury which the owner sells.

While no one expects the premises to be filled with choirboys sipping communion wine and reciting the Lord’s prayer – where two or three or three hundred are gathered together around copious amounts of whiskey, vodka, cognac, music and willing participants in debauchery of various versions, occasionally there would be a brawl or two.

Still, for a high end organisation like Quilox, that simply is not what is expected of them. When the matter now seems as though it was sanctioned by management like the M.I issue (who, by the way, was savagely trolled by the club’s official handle when he went on a Twitter rant the following morning) or the Oritsefemi beat down, it won’t be long till the high rollers start to worry. No high-end place should be the site of a fight. Period. If Peller wants, he could have a boxing ring in there – like the Las Vegas hot spots that inspired his place and make a few millions off professional and amateur pugilists.

How furore between M.I Abaga and Quilox Night Club began

Furthermore, throwing bottles across the dance floor like it happened between Wizkidand Dammy Krane back in January is what you’ll expect to see in a backwater beer parlour, not at the self acclaimed pulse of the Lagos hospitality scene. Now that is not to say that the management of the club can preempt which of their clients would end up acting belligerent, but their staff could act less haughty.

The management has released photos of the injury sustained by the bouncer Oritsefemi allegedly attacked. That’s one way of attempting to clear their name, but the repeated incidents are dragging Quilox from its esteemed position to the equivalent of a roadside joint where fights can break out at any time.

They might want to look at the history of CCC Club, where D12 rapper and Eminemassociate, Proof was killed in 2006. The deceased was acting just as ridiculously as Oritsefemi and fired his gun during an altercation with a bouncer. He eventually was instantly killed when another bouncer shot him. The fate of the club? It got caught in the middle of several lawsuits and had to be shut down eventually.

It won’t be all fun and games should anyone get seriously injured at the hands of Quilox’s eager bouncers. In dealing with genuinely aggrieved clientele and wannabe hard guys like Oritsefemi, the brand must tread with caution as it has the most to lose.

Lest Quilox be feeling invincible as we all tend to be at the height of success, all Shina Peller needs to do is to cast his mind back and think of how many nightclubs have come and gone in the last 10 years. The entertainment scene is a fickle and vicious: one minute fans are all heading to a hot spot and the next they’ve moved on to the next popping one.

The ghosts of nightclubs past dot the Lagos landscape: 1145, Tribeca, Club Papas, Bacchus, Club 10, Koko Lounge, Pop, Swe Bar and countless others have all come and gone and now are part of history. Quilox might be big but it is not too big to fail, if care is not taken. Moreover, it doesn’t take long before something newer and shinier comes along. Even the legendary Niteshift Coliseum was forced to end operations after 25 years. Let’s hope Quilox can make it to 10 at least.