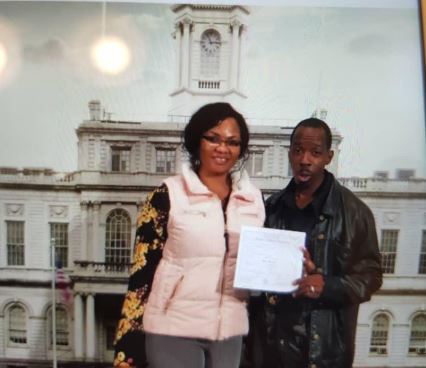 A close aide of hers in America who was privy to the whole saga and who was not happy with the lies and denials by Yemisi against her hubby spoke to me and revealed that she had a marriage with her estranged secret lover in America.

According to her, the genesis of the whole saga was her adulterous nature and lies which informed her hubby doing a DNA test of the kids in America:

I decided to unravel the truth after five years of painstaking understudy of the whole drama as an insider.

The sordid details revealed that Pastor Yemisi has been sneaking out after church services to be seeing different men at secret locations withing Kubwa, Abuja.  This explains why she doesn’t wait for her hubby after service and doesn’t have time to cook for him even when he comes home late in the night around 10/11 pm.

That rude discovery led to confrontation and revelations.  That discovery led to the opening of the wound inflicted on the marriage from inception. Before marriage, Bro Iginla informed her that his genotype was AS and she said her own too is AA. Based on trust, they went ahead with the relationship (most of the pastors in the church are aware of this). The shocker was when their first child was born and they discovered she was SS.

She opened up and said out of fear she had to lie. They settled the Issue amicably and life goes on.

The phone leakage led to the hubby’s investigation and the DNA result revealed that he was not the father of some of the three kids they have ( I have to keep the secret of the identity of the kids involved for now but of a truth DNA was conducted secretly and Iginla refused to release it because of the kids).

When confronted with these facts, all hell was let loose.  It’s on record that at a point prophet Iginla was poisoned which he testified about it during his birthday celebration years ago but what he kept out was that the wife was fingered as the brain behind it.

Family members were invited and the truth revealed about her alleged waywardness and Prophet Iginla pointed out that he can’t trust her again but the only Condition for him not to divorce her was to agree never to object to him having his own kids who will be his flesh with another woman and she agreed. That was why she could not say anything when prophetess Stella was pregnant for Pro Iginla four years ago.

That was just the beginning of the whole saga as she made life unbearable for him.

First,  she made an attempt to seduce Iginla’s current Personal Assitant, Femi,  who was living with them as an assistant then.  But like Joseph in the Bible,  Femi resisted and was forced to report to Iginla. That was why he moved the boy out of the house and Yemisi was so angry that she allegedly confronted him and queried why he has to send his comforter away ( kilode to se le alanu mi lo) Yemisi Iginla getting married to her lover

Many times she will physically lock up her hubby and harassed him saying nobody will believe it even if he should speak out and that as a clergy it’s a taboo for him to touch her. Several times, it was Iginla’s former PA, Seun Adeyemi who will rescue him and lodge him in hotels at Kubwa.  Aside from that,  several times after service this same PA will be forced to get gala and soft drink for Iginla after breaking his fast after church service ( many of us can attest to it that prophet Iginla do fast a lot )

In fact,  the torment was so much that she will confront most of Iginla sponsors and blackmail him and demand for money from them.   Those ones would call Iginla and tell him if he doesn’t do something urgently about her, she would destroy the ministry.

The last straw that broke the Camel’s back was when she called Iginla’s personal lawyer when he travelled out on a mission and during the meeting, she asked him what chance does she have in acquiring all his properties if he dies? The lawyer was shocked and refused to respond.  She told him she was ready to share the proceeds with him and also ready to pay in kinds too if he is willing to play balls.  The lawyer said he will get back to her and left.

Immediately Bro Iginla got back the lawyer informed him that he needs to act fast that for his wife to ask such it means his life is not safe.

Consequently, Iginla had an urgent meeting with his pastors and partners and they all agreed he should send her away.  Pro Iginla refused and said instead of that he will relocate her to USA and make sure she is well taken care of and that will save the ministry from unnecessary embarrassment.  That was why he relocated her to America.

Trouble started lately when she connived with some pastors who fell out with her hubby and threatened to reveal the identity of the baby mama to the world.

They demanded N300 million and the calls never stopped.  After prayers and due consultations, he decided to confess rather than fall into the traps of blackmailers.

Of a truth, the torment was so much that Bro Iginla almost died from pressure and torment.

And the truth is that Iginla never married Stella in South Africa, it was forged.

That’s why the church elders, council, pastors, sons and daughters of the prophet and partners are standing with prophet Iginla because they are all aware of the whole saga. In fact, have you ever wondered why family members have never chided Iginla?  It’s because they are aware of the whole truth.  Why did she pull down the facebook live video she did on her page?  Know the truth and the truth will set you free.