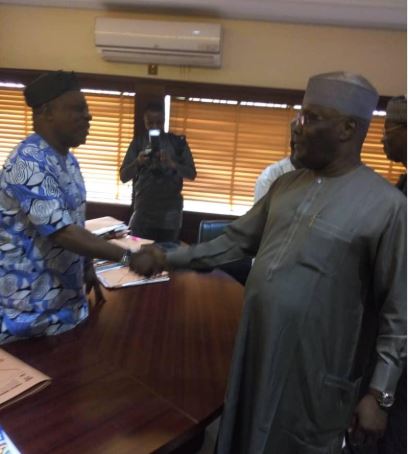 Former vice-president and foremost presidential aspirant, Alhaji Atiku Abubakar, on Friday paid a courtesy call to the National Secretariat of the Peoples Democratic Party (PDP) in Abuja.
During his visit which was attended by all members of the party’s National Working Committee (NWC), Atiku praised the leadership of the party for ensuring a free, fair and transparent election at the recently conducted Ekiti gubernatorial primaries.
According to him: “Let me start by commending the NWC for piloting a free, fair and transparent primaries in Ekiti. I believe if we sustain this, PDP will do exploits with this precedents you have set, PDP will regain its prominence. I wish to congratulate the members of the NWC as managers of the party and your performance is indicative of how Nigerians see the party,” he said.
While speaking on his presidential ambition, Atiku stated that one of the reasons for visiting the party’s headquarters is to formally put the party on notice of his intention to present himself as an aspirant for the exalted office of the President of Nigeria under the party.
Alhaji Atiku further reiterated his commitment to the party and Nigeria as a whole whether he gets the ticket or not.
Speaking on behalf of the NWC, the party Chairman, Prince Uche Secondus, stated that the leadership has vowed to return the party to the original vision of our founding father.
“We have total commitment to run a free fair and transparent party. We will conduct all election primaries with the utmost fear of God. We cannot allow Nigeria to collapse,” he said.
Post Views: 606

Related Topics:Atiku visits PDP Secretariat; reiterate commitment towards a better Nigeriaslideshow
Up Next