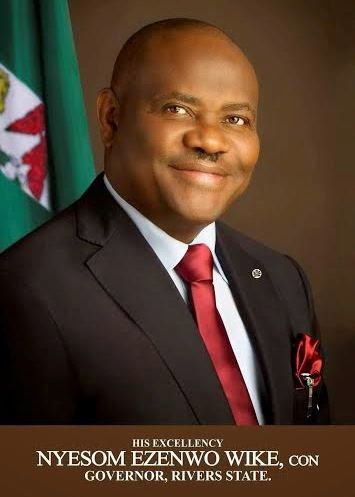 The Rivers State Chapter of the All Progressives Congress APC, said “despite all the false public posturing, blackmail, propaganda and media war by Gov. Nyesom Wike against the Inspector-General of Police, Mr. Ibrahim Idris and the FSARS Commander in Rivers State, ACP Akin Fakorede, the governor has finally lost the war against the two police officers as his delegation has arrived Abuja to beg the IG for forgiveness on his behalf.”

The opposition party in the State claimed that the “delegation sent to Abuja by Gov. Wike to beg the IG is made up of his close hangars-on commonly referred to as his Cardinals and they include Chief Ferdinand Anabraba, Desmond Akawor, Glory Emeh, Sergeant Awuse, Celestine Omehia and Austin Opara. The team is in Abuja as we write.” The party in a statement signed and issued by the party’s spokesperson, Warisenibo Chris Finebone: “The APC is aware that shortly after ACP Akin Fakorede threatened to pursue legal action against the Rivers State Government for running a damaging front-page blackmail against him in many national newspapers running close to N1b for months, Gov. Wike was prevailed upon to discontinue the media war and seek peace with the Police IG. Those who prevailed on the governor to balk down and beg premised their advice on the seeming refusal of President Muhammadu Buhari to remove the Police IG and Akin Fakorede based on propaganda by Wike and other detractors of the Police boss.”

The APC recalled that quite early in this dispensation, Gov. Wike launched an all-out media attack against IG Ibrahim Idris hoping that President Buhari would be hoodwinked into removing the IG. When that scheme failed, the governor turned his war on ACP Akin Fakorede and the FSARS in Rivers State believing that the IG would be so embarrassed as to remove the FSARS Commander. It must be stated that the attack on Akin Fakorede was launched because the officer severally turned down monetary offers from the governor in exchange for doing the governor’s bidding. The war was to get Fakorede out to make way for a replacement who may be pliant or likely to succumb to the governor’s insidious advances.

According to Senibo Finebone, “Having failed to get the Inspector-General and the FSARS Commander out of the way, Gov. Nyesom Wike assembled his delegation who reached out and booked an appointment with the office of the IG culminating in the delegation members’ trip to Abuja where they will see the IG and beg on behalf of the governor.”

The APC surprised that after Gov. Wike huffed, puffed and blackmailed IG Ibrahim Idris and ACP Akin Fakorede to no end, the governor decided to eat the humble pie by sending a high-powered delegation of his men to go Nicodemusly to beg the IG.

The statement reads: “The position of the APC is that the IG should discountenance the dubious olive branch Gov. Wike is offering through his delegation because the governor has made up his mind to disrespect and rubbish federal institutions (especially the Nigeria Police) on the altar of partisan politics. Having maligned and blackmailed IG Ibrahim Idris and ACP Akin Fakaroede publicly, Gov Wike should apologise to both officers and gentlemen publicly. Sending a ‘midnight’ delegation to go and beg the IG indicates that Gov. Nyesom Wike is not sincere and not ready to turn a new leaf.”

“The APC wishes to advise Gov. Wike to stop giving Rivers State and its people poor public image because his private and public uncouth utterances do not portray the true image of Rivers people. Our people have a track record of being respectful, groomed in good behaviour and well cultured in our utterances. These are clearly attributes inherently lacking in Gov. Nyesom Wike. Indeed, he does not (any bit) represent who Rivers people are.”

“We remind the Inspector-General of Police, Mr. Ibrahim Idris that Gov. Nyesom Wike’s latest olive branch is not altruistic, lacking in honesty and totally opportunistic. The IG should realise that if President Buhari had listened to the damaging media war Gov. Wike levied on him and his men, by now he would have been removed by Mr. President. The IG must reject Wike’s evil entreaties for lack of sincerity.”