LINGER, written by Tomi Owó, is part of an audio-visual campaign collaboration with HelaBase, the creators of premiere Afrocentric popular culture entertainment, and Samsung, the globally recognized industry leader in technology. Her soft, smooth vocal texture and superb writing skills shine through in this sweet piece of music and art. Derived from the depth of this sound, the music video was shot to capture the story told within the song. 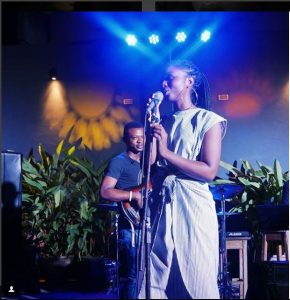 Listen to other tracks from Tomi Owó HERE.

Tomi Owó is a soul singer-songwriter from Nigeria. She believes music is a gift, and a channel through which we can tell our stories, support ideals, and appreciate the intricacies of life that we often let pass by. She began her career in 2015 with the 1-song a month project that culminated in the release of “PIECES” a compilation of songs from that project. In 2017 she embarked on the Nostalgia Sessions project to cover golden songs from back in the day.