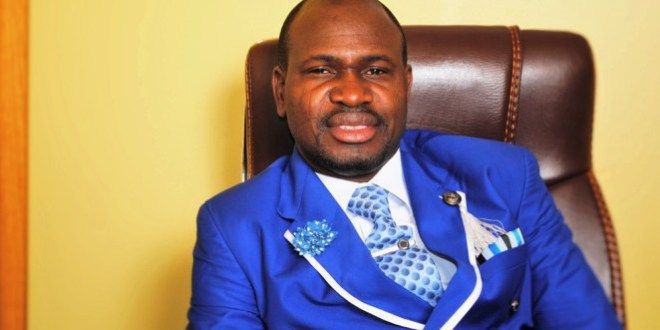 South Africa-based Nigeria prophet and Shepherd In charge of Freedom for All Nations Ministry, Samuel Akinbodunse has once again proven to the world that he hears directly from God.

This is as Pro. Samuel Akinbodunse precise and detailed prophesy about Mugabe has come to pass.

Earlier this year, precisely May 21st, Pro. Samuel Akinbodunse predicted accurately that President Mugabe should pray to see beyond November as Zimbabwe’s Head of State.

Thereafter, he once again warned him directly during the wake of his brouhaha with his deputy that he should reinstate his deputy or the prophesy that he won’t see beyond November will come to pass.

It would be recalled that in the early hours of Wednesday, 15th of November, reports the Zimbabwean Army took over the affairs of the country though they claim President Mugabe was sound.

They were reported to have arrested top Government officials in the country with explosions, and gun fire experienced on the streets of Zimbabwe following plans to make the First Lady, Grace Mugabe take over from her husband.

The Military officers, however claimed that the latest development isn’t a coup, announcing on state TV that they were targeting a ring of government plotters following a power struggle that saw the vice-president flee the country last week. “It is not a military takeover of government,” an army spokesman said in a televised statement. “We wish to assure the nation that his Excellency the President and his family are safe and sound and their security is guaranteed. “We are only targeting criminals around him who are committing crimes that are causing social and economic suffering in the country in order to bring them to justice. “As soon as we have accomplished our mission we expect that the situation will return to normalcy.”

There was allegedly a brief gun fight outside Mr Chombo’s house. All three are part of the G40 faction of Zanu-PF which is loyal to Grace Mugabe, who was being lined up to take over from her husband.

Also Read:  My Man Must Be Goal Oriented-Belinda Effah