Connect with us
–  ” why I dashed them cars”
Philanthropic clergy and Shepherd in charge of Champions Royal Assembly based in Kubwa, Abuja, Bro Joshua Iginla has put  smile on the face of another Nollywood star,  Ayo Emmanuel widely known as Nollywood Police. 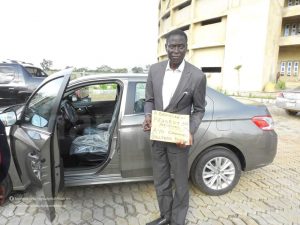 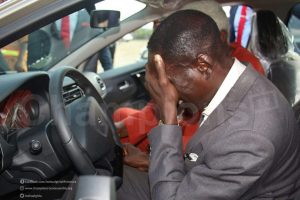 The actor was given a brand new tear rubber N4.5 million  Peugeot 301 on Sunday,  October 9, 2016.
During the Sunday service at champions Royal Assembly ‘s city of wonders , Kubwa , Abuja , the fiery prophet located him and said his problem was both spiritual and depression. He criticized those who blamed him for helping Nollywood stars citing the fact that most of them live a make belief life and deserve our help because piracy has ripped them off of their hard earn money.
” it amazes me when people criticized the fact that I helped the movie industry .  I have given cars and financial assistance to the poor, needy, church members and aides but just a fraction to that industry as a means of encouraging them. Compare their lives to Hollywood stars and you will realize we don t really appreciate our own.  I wept when Ayo Emmanuel sent me a text few weeks back that he was sick and need financial assistance. I wept because these are the people that makes us happy via home movies yet they live a pathetic life. It’s my personal money I used so I don’t see why people complain.”
He asked him if he has a car and he said no.  He claimed he comes to church via okada or church bus.
Immediately, Bro Iginla gave him a brand new wonder on wheel  which is a silver coloured Peugeot 301 which he got at N4.5m just for him the dazed actor burst into tears of joy.
The nollywood actor has worked with veterans in the industry and has appeared in a lot of movies which one of the Latest is ‘Dairy of the Triplets.’
Post Views: 505

2016 Most Beautiful Girl In Nigeria Cancelled

Back On The Scene, Iyalode Alaba Lawson Party Again