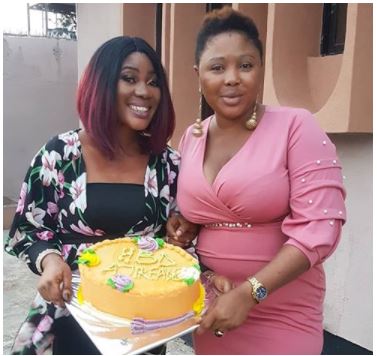 Omowunmi Ajiboye has denied claims that she was best friends with Atinuke Ajiboye before she married her man, Segun Ogedengbe.

According to Omowunmi, the story is not true, as they were never best of friends, but are indeed married to the same man.

Atinuke was the first wife of Segun before Omowunmi came in as a second wife. Like most polygamous homes, following the second marriage, both ladies accepted they had been married to the same man and had to manage the situation. They have since now become best of friends.

Only recently Ogedengbe celebrated his birthday with his wife Omowunmi throwing a party. The party was attended by Atinuke and led to speculations that the actor was celebrated by his wives who were once best friends.

In an attempt to clear the air, Omowunmi released a statement on her IG page. According to her, Atinuke and herself were never best friends before their marriage and that they have now become best friends because of their husband.

Below is the statement

Good day everyone…I dont usually do this,but i think is high time i cleared the air about this issue of myself and @atinukeogungbe..
Firstly,we were never friends from the start before i married @segunogungbefilms who happened to be our beloved husband now..i was a lagos based young lady before getting married to @segunogungbefilmswhile @atinukeogungbe is an abeokuta based..Now,the problem is people carrying rumors that we were best friends then…YES we are BESTFRIENDS NOW and that’s because our husband’s happiness is our own main PRIORITY..
This will be the first and the last time i will be addressing this issue, not saying this to make myself feel justified for whatever happened but i do believe rumors are only carried by ignorants & fools..Now i leave you all to your own opinions?