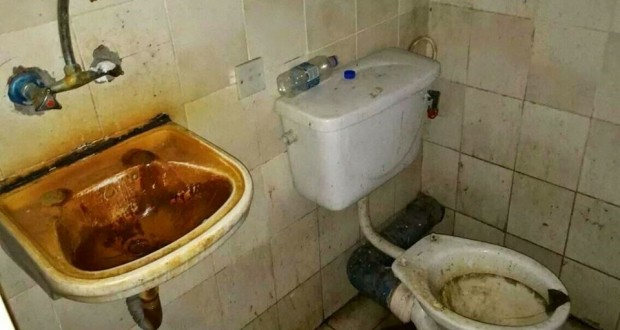 The fact that there is corruption in government ministries, departments and agencies has been severally stated.

On multiple occasions, there have been tales of how important proposals and other documents have gathered dust just because the companies or individuals, as the case may be, that were pushing for the contract had failed to grease the palms of one office assistant or the other.

Government institutions are believed to be money-spinners where staffs make money as files move from one room to the other.

Sadly, the money making in government facilities is not limited to the offices, but also the toilets too. Like late Isaac Agbetusin of DMT toilets always said when he was alive, “Shit business is good business.” So it is in our government owned facilities.

Though many workers will tell you that there is no corruption going on in their offices, the one that can hardly be denied is the small business taking place in the convenience. Everyone uses it and can see what is going on. The convenience business thrives in several government establishments including courts, airports, markets, stadia, gardens, motor parks and in some cases, general hospitals.

This business, though small in scope, is consistent, as they have continued to thrive for years.

A recent visit by Saturday INDEPENDENT to Island Maternity Hospital, Lagos Island, Lagos State revealed a thriving business, as an elderly woman was in charge of the toilet and bathroom in the premises of the hospital.

With the help of a young girl, she manages the toilet and bathroom, making sure that they are clean and there is water and tissue available at all times for patrons. But in return, she demands for money to allow you ease yourself.

Unlike the case of Island Maternity Hospital, which is managed by an elderly woman, the toilet of the magistrate court is managed by a fair-complexioned chubby lady in her mid-twenties. The duo of a young man and woman are in charge of the Ikeja High Court, Lagos State. A distinctive feature of the pattern of business at Ikeja High Court, Lagos is that the convenience closes for all at 4pm. After then, all who wish to use the convenience have to seek alternative toilets or find the nearest eatery around to do their business.

What obtains at the Igbosere High Court, Lagos State is not different from that at the other courts.

The modus operandi of the business is the same everywhere, as anyone willing to use the convenience has to pay between N20 and N50.

The sum of N20 is paid when a patron is to urinate and N50 for doing ‘number two’. Regardless of the number of times that you want to use the rest room, a patron is expected to pay each time, as there are no discounts.

One glaring fact that Saturday INDEPENDENT noticed was that most of the toilet managers are unfriendly, either male or female. A patron is asked to pay before gaining entrance, and if in any case you rush in because you are pressed; you are expected to pay as soon as you exit. Delay in payment often attracts stern words from an unfriendly and frowning face, oftentimes the manager.

Speaking to Saturday INDEPENDENT, Bukky Ayeola, a lawyer, revealed that managers of courthouse toilets have had to resort to such tactics because of the fact that conventional methods have failed. “In the past, things were managed normally. Anyone can access the toilet and use it, but overtime it became obvious that there was the need for a toilet supervisor. Someone who would make sure the toilet is always clean, someone who knows that it is his or her business to ensure that the place is neat at all times. If you see how messed up these toilets can be, you won’t dare to use it. I don’t see what is wrong in collecting stipends for the use of the toilet because someone has to keep it clean.”

While some people might consent to the idea of paying a token to use the toilet in public establishments, there are also those who disagree with the position.

Tayo Adeniran explains that the concept is wrong. According to her, what we should do is correct our attitude to life, our personal hygiene. “As long as you are not a toddler, you should know how to use a toilet, and if for any reason you mess it up while using it then clean it before leaving there.”

Putting managers in public establishment to maintain the toilets is another fraud because you need to ask where the money being made eventually goes to. Does it go to the head of the establishment, is it the council or the local government that collects it or is it the meal ticket of the toilet manager?” She asked.

“The supposed managers of the toilet can be staffs of the state’s civil service and still do their work as toilet managers by keeping the place clean. They don’t have to collect money from visitors of government establishment because they want to use the restroom, it is wrong and embarrassing.” Seyi Irontiola said.

Prince Saheed Olaseni Akinsemoyin, who is a toilet manager at a public toilet in Oshodi area of Lagos, explains how he does his own business. He explained that there are times when he has had to allow people use the toilet despite the fact that they didn’t have money or what they had wasn’t the required rate. “Some customers come without money. They would beg you to use the toilet without paying and there is nothing you can do in that situation than to oblige them. You can’t just send them away. And there are others who would come with a sum that is less than they are supposed to pay. We still allow them.”

He explains how he does his business. According to him, after a customer has used the toilet and left, he would check to see if it was properly flushed. If it is not well flushed, he would clean it so that the next customer would meet it in good condition. “I always make sure that the place is not messed up because you don’t know who would be coming.”

Prince Akinsemoyin also added that toilet managers face series of challenges from customers. “At times, some customer would have been so pressed that they would defecate on the floor,” he said.

“Some customers clean their buttocks on the floor instead of doing so sitting on the toilet’s seat; so the managers are forced to pack the tissues and in some cases excreta to make sure the place is clean,” he added.

He went on to say that they also suffer embarrassment, as a customer once told him that his mates were working in banks while he was washing toilet.

While some patrons wonder why they have to pay to use the toilet in a government establishment, others have described it as a welcome development as far as the toilets in such organisations are concerned.

Titilola Alade agrees with Ayeola when she said that this style of maintaining the toilet in government establishments has actually worked.

According to her, the toilet in Ikeja High Court, Lagos State is always sparkling clean and it is as a result of the fact that there is someone maintaining it. Further, she said that the place always has a fresh scent and she has even had to ask the cleaner where he buys his air freshener from because she would like her toilet to smell the same way.

On her part, Iya Semiu, a trader and a patron of such toilets said, “In the past, the people charged with the responsibility of cleaning the toilets only do so in the morning and do not clean it as people use it through the rest of the day. Is it too much to pay N50 to be able to use a clean toilet?” She asked.

For another patron, Tomisin Olaoluwa, a total reorientation of how we behave and handle public establishments will help matters.

In her words; “To say that people should pay for using public toilets in government establishments or for its maintenance is settling for less. People should be trained on public behaviour; they should change their approach to life and how to use government properties. It even goes beyond toilets in government establishments; our general attitude regarding government properties should change. That way, we will use public places better and regular maintenance can be given to such places, just as you step into a bank and you don’t have to pay to use their rest room.”

The idea of paying to use toilets is not exclusive to Nigeria alone, as in some countries abroad it applies. Shocking as it is, a study done sometimes back has shown that even Americans agree to the idea of paying for the use of public toilets, which is fast becoming in demand due to the increase in the number of homeless people.

56% of Americans say they’d consider paying as long as they were guaranteed a clean, well-stocked public restroom. The above findings are from a restroom and hand washing survey conducted annually by Bradley Corporation, a leading manufacturer of commercial plumbing fixtures and washroom accessories.

Airlines have even tried this option. In 2010, Irish discount airline Ryanair reportedly tried to introduce charges for the use of its toilet. The airline planned to charge either one Euro or British Pound to use the toilet for flights scheduled for one hour or less.

According to its spokesman, Stephen McNamara, “By charging for the toilets, we are hoping to change passenger behaviour so that they use the bathroom before or after the flight,” he said.

While it was touted as a great cost-saving move, it was still criticised by critics who called it inhumane.

“It’s one of the most absurd ideas I’ve ever heard. The extra fee for the bathroom, Steven D. Soifer, an associate professor at the University of Maryland’s School of Social Work said.

In most European countries, while people don’t have to pay to use toilets in public places, they are encouraged to tip the cleaner of the place, as it is often boldly written in a very visible corner of the toilet.

The Special Adviser to the Lagos State Governor on Environment, Mr. Babatunde Hunpe, said that “Aside the public toilets the government is building, we are also partnering with the private sector to do same. We also want to appeal to corporate organisations and individuals to construct public toilet as their own Corporate Social Responsibility, (CSR), in the state. The door of our ministry is open for such partnerships.”

While N20 and N50 might be considered as stipend, the absurdity of paying before using the toilets in government establishment seems too much to digest for some people. And to them, bringing an end to the idea right now can’t be overemphasised.

Related Topics:Nigerians Lament As Conveniences At Government Establishments Turn To Money Spinning Business/Venturesslideshow
Up Next

Fighting Off Evil on the Astral Plane