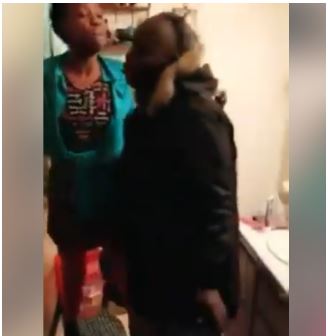 The claims that Nigerian wives living abroad hardly respect their mothers-in-law came to fore recently when a woman was filmed insulting her mother-in-law.

Interestingly, the husband of the woman while pleading with his mother to leave the room filmed the scene.

In the video shared online, the wife can be seen raising her voice at her mother-in-law as they quarrelled.  The row took place in the bathroom at their home abroad while the woman was bathing her daughter.

The wife hurled insults at the older woman in Yoruba and her mother-in-law also replied her with words of her own. The wife even threatened to beat her mother-in-law at some point stating that she doesn’t have a mother and hardly knows the value of one.

Watch the video below:

Related Topics:Nigerian Wife Based Abroad In Messy Exchange Of Words With Mother-In-Lawslideshow
Up Next

Faces Of Notorious Ilorin Criminals To Die By Hanging