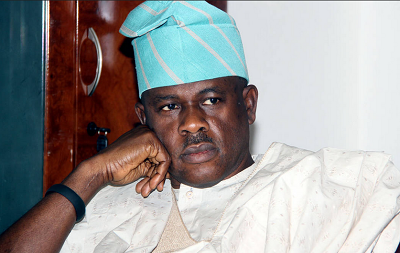 • Ex-minister ordered soldiers to break airport security gate for bullion van •$25,000 paid for the two flights to Akure •Money was withdrawn from bank but no records of transaction

Fresh insights into how a former Minister for Defence, Musiliu Obanikoro allegedly loaded a chartered aircraft with N1, 299, 490b for transfer to Governor Ayodele Fayose through an associate, Abiodun Agbele has been revealed.

The cash was transferred through HS125-800 5N-BMT belonging to Gyro Air Limited.

The first flight was filled with N724.5million cash to the extent that there was no seat for any crew member or the ex-Minister.

It was during the second flight with N494.990m that Obanikoro, his Aide-de-Camp, Lieutenant Colonel A.O Adewale, and crew member joined the trip to Akure Airport.

The EFCC has retrieved the footage details of Obanikoro’s movement at the airport and the flight schedule of the aircraft.

According to fresh evidence obtained by the EFCC, the ex-Minister had defied security gate at the airport in Lagos to move a bullion van to the apron of the chartered wing to off-load the cash.

Although the security men at the airport resisted the use of the security gate, the ex-Minister ordered soldiers to break all barriers for the bullion van to get to the apron.

A reliable source, who spoke in confidence, said: “Contrary to his attacks on EFCC, we have retrieved the footage and details of how he ordered soldiers to break the barriers at the reserved security gate at Lagos Airport for a bullion van to go to the apron of the chartered service wing.

“He defied security men at the airport and refused to subject the bullion van to any screening contrary to aviation rules. In fact, apart from financial crimes, the ex-Minister, and his accomplices have outstanding allegations against them for violating aviation safety rules or regulations.

“The aircraft made two shuttles to Akure Airport on June 17, 2014. Our investigation revealed that during the first flight, about N724.5million was offloaded from the bullion into the aircraft. The cash occupied all the space to the extent that there was nowhere to sit by the crew and the ex-Minister.

“But when the balance of N494.990m was loaded into the aircraft for the second trip, Obanikoro, his ADC, one highly-placed person from the South-West, and the crew were able to make the trip.

“Let him continue to make noise in the United States instead of coming home to clear his name. We have interacted with the aviation staff on the ground on the said date.  We have identified the owner of the aircraft to be a member of the sacked management of Skye Bank Plc.”

Meanwhile, there were indications yesterday that the ex-Minister paid $25,000 for the two flights to Akure at $12,500 each.

Another source confirmed that the aircraft belonged a member of the sacked management of Skye Bank Plc.

“We have evidence of the payment of $25,000 to Gyro Air Limited for the two flights to Akure. And Zenith Bank confirmed how Fayose’s associate, Agbele, brought the cash into its branch in Akure to keep as sundry funds.”

Responding to a question, the source said: “From our findings, the Minister and Fayose fought over N80million missing from the total cash.

“They had a shouting match until reasons prevailed between the two politicians on the whereabouts of the N80million.”

An Investigating Officer of the EFCC, Tosin Owobo during the week opened up at the  Federal High Court, Ado-Ekiti on how the N1, 299,490,000.00 was wired into Governor Ayodele Fayose’s accounts by one of his associates, Abiodun Agbele.

Owobo, who swore to an affidavit, said: “That the total sum of N 1, 219,490,000 (One billion, two hundred and nineteen million, four hundred and ninety thousand naira) was conveyed to Akure Airport by Senator Obanikoro through a chartered aircraft with Registration No: HS125-800 5N-BMT belonging to Gyro Air Limited.”

“That on the 17th day of June 2014, Mr. Alade Oluseye in the company of one Abiodun Agbele a front of the Applicant (Fayose), went to the Akure Airport wherein they took cash delivery of the sum of N724,500,000.00 from Senator Musiliu Obanikoro and his acclaimed Aide-de-Camp Lieutenant Colonel A.O Adewale.

“ That the total sum of N 1, 219,490,000 (One billion, two hundred and nineteen million, four hundred and ninety thousand naira) was conveyed to Akure Airport by Senator Obanikoro through a chartered aircraft with Registration No: HS125-800 5N-BMT belonging to Gyro Air Limited.”

We Are Not Owing Salaries-Dr. Abdulfatah Ahmed