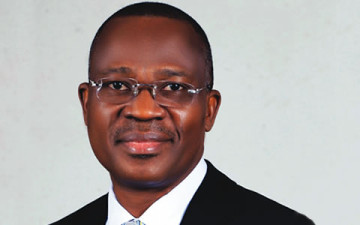 Indeed, life has been fair toTimothy Oguntayo. Once he was the Managing Director of the defunct Skye Bank Plc.

Typical of most Managing Directors of financial institutions, the banker enjoyed a good life.

Though a very conservative man, this never stopped him from looking good whenever he stepped out. Truth be told, Oguntayo enjoyed all of the good things money could buy.

Then the unexpected happened, as he unceremoniously resigned his appointment despite the fact that his tenure was yet to expire.

The gossip in town then was that the board had lost confidence in him and had asked him to step down or be fired, hence his abrupt resignation.

Amidst the talk of his resignation and his subsequent arraignment and re-arraignment before Justice Ijeoma Ojukwu of Federal High Court, Abuja, on an eight-count charge bordering on money laundering to the tune of N8billion, Oguntayo maintained a very low profile, such that there was a lot of sympathies for him whenever he appeared in court.

Years after he lost his magic wand as an astute banker, Oguntayo has simply disappeared into the thin air with no mention of his name being made in any sphere of the financial industry.

This has seen posers regarding his whereabouts being the talk of the town.

Rare Gem, Adewale Tinubu Gets Oando Back On Track