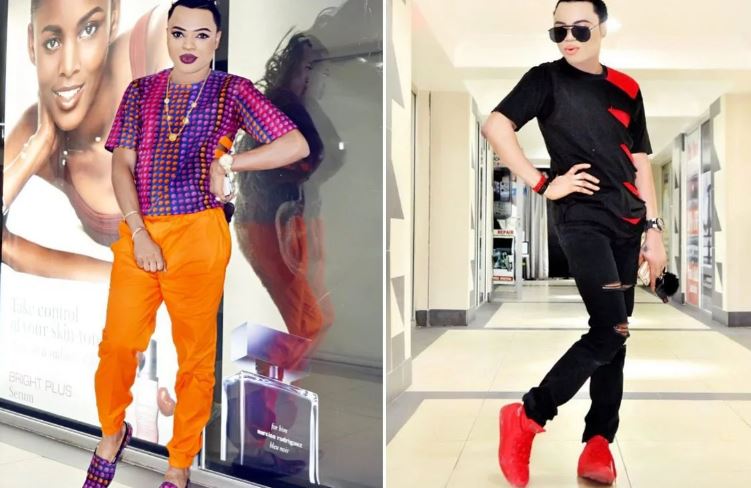 Our youths are always importing fashions and habits from abroad, copying trends and adopting them as their own. The end result is that sometimes they often look ridiculous and out of place.

The latest fashion craze some men have copied from abroad is cross-dressing. Call me old-fashion or old but where I come from men wear trousers and shirts and women wear dresses and make-up; not the other way round (-unless for religious reasons!)

Cross dressing was alien to most Nigerians until the OAP and entertainer Denrele burst on to the scene with his wild Afro hair, platform shoes and flamboyant feminine outfits. And with his androgynous features he could be either sex. Now while one might consider Denrele’s cross-dressing as a prop or a costume – an extension of his entertainment personality – in the same way comedians Eddie Izzard or Dame Edna would dress would dress up and once the show is over it’ll all come off. That is the belief. But recently some men who are not in the entertainment industry have taken to cross-dressing as a normality.

If you’re a man and wear a dress when I was growing up your father would grab his koboko and beat that nonsense out of you.

If you’re a man who wears make-up and a dress, like Bobrisky or Seun the Diva, because you want to either tune into your feminine side or think it’s fashionable, you’re gay! Either that or you’ve got some serious mental issues that need addressing!

There are those who suggest men should tune into their feminine side, once in a while(?).Perhaps. But not to the extent that you start piling make-up on to your face. No real man wears make-up – let alone wear a dress! What would your mother say (- and the rest of the family?) And how are you going to find a girlfriend (- you probably don’t need one unless she – or he – wouldn’t mind sharing their make-up and clothes with you!)

Now if you’re a cross-dresser who isn’t gay then they’re on their first steps to becoming trans genders. Bruce Jenner might have had his male bits removed to become Caitlyn Marie but he’s still a man. It doesn’t matter that he’s grown boobs and had a vagina surgically put in, wears expensive designer dresses – and makeup. He’s still a man because he can’t do the one thing women do every month – menstruate!(- or experience menopause at his age!)

Again call me old-fashion but a cross-dresser is a fantasist. You’re either a man or woman – you can’t be both. And it’s not fashionable or desirable to the eye – a cross dresser to me looks like a character out of a horror movie!

Perhaps its insecurity that makes some men cross-dress. For some reason or another they are not happy being the ugly person they are and believe they have to create a make believe personality. If you’re unhappy with yourself go and see a psychiatrist or better still pop into one of the many mushroom churches and let them pray for you and sprinkle Holy water on to your stupid head! If you still want to cross dress after all this please keep it to your bedroom! I have no intention of sitting next to a man dressed as a woman in the bus!

Since in my opinion cross-dressers are gay and in an attempt to circumvent the draconian Nigerian ant-gays laws they pretend to look like women. I don’t think a police officer is that blind not to notice what a man looks like in a dress when he catches him with his boyfriend! I’m not homophobic and I don’t think a lot of people are so instead of cross-dressing why don’t you simply come out? (- hopefully you won’t get arrested or stoned!).

Cross-dressers on the other hand will probably argue that women have been cross-dressing for centuries wearing trousers, suits – even agbadas recently – and nobody said a word. And that you even have tomboys that like to replicate a man’s look right down to haircuts and walk. Perhaps. But it’s not the same. A woman may look great in trousers or a suit but the appeal is the opposite when a man wears a dress or makeup. Our highly conservative society can accept a woman dressing like a man but not the other way round.

Even in Western countries, where people are more liberal, men who cross-dress are still looked down upon on as being weird and out of place. And unless it’s for entertainment purposes then the general assumption is that they are gay.

Perhaps cross-dressing is colourful: a new trend by some brave men trying to prove they can wear it better than women. Perhaps they are showing their hidden homosexuality hoping they’ll be accepted as transgenders rather than straight-forward gay.

Already society has begun to frown at cross-dressing, especially in the sharia strict North who recently jailed a cross-dresser for indecency under their strict moral laws. Again what message does it send out to the young impressionable children growing up in their wake? That it’s O.K for a man to dress up as a woman?

Most of our cultures see the man as a leader of his family and the community, wearing a dress will relegate him down to the ranks of the women who can only cook, clean and make babies.

So for all cross-dressers out there it’s time to stop shaving your hairy legs and eyebrows and stop the wearing of make-up. Time to start wearing trousers and shirts again instead of dresses with butt-pads. And enough of the fake funny feminine accents and skin bleaching! You’re a Man and not a Woman, deal with it!

Related Topics:Is Cross-Dressing the New fashion Craze?slideshowTony Ogunlowo
Up Next

How to Make this Valentine her Best Ever: Gifts for Her