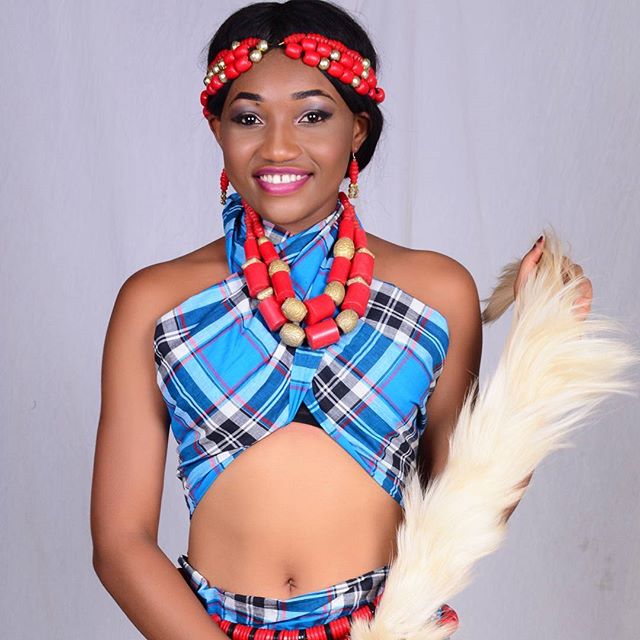 Multiple crown holding beauty queen, Judith Orisaekeziem has revealed that being called Igbotic is flattering because it makes have a sense of self-originality.

The Ebenato, Orsu Local Government Area of Imo State born beauty queen who was recently crowned Face of Igbo Heritage Imo Queen said this in chat as she recounted her experience in the camp which saw her emerge as one of the victorious models. She said the camp experience was a huge flashback on Igbo culture and heritage where they were taught who the Igbos really are.

“We built our own houses and did so many things for ourselves just to show that Igbos are producers not consumers. It is a great tribe where we make everything for ourselves. We farm to produce what we eat and make our own cloths as well as other things. We have lost that sense of originality and self-reliance which leaves us at the mercy of the west for the solution to our simplest needs” she said.

Queen Judith who is also winner of Face of Spicesy 2015 and Most Beautiful Model in Imo Diaspora 2016, enjoined Igbo to retrace their steps so as to bounce back to the good old days when things were good.

The light skinned beauty queen then tagged Igbos who taunt others with the Igbotic tag as ‘confused’ adding that they should go back to their parents and ask where they have come from or better retrace their paths so as to understand what they are doing.

“I love being called Igbotic”, she said, adding that “When someone calls me Igbotic, I feel very happy because the person has just told me that I’m being original. Being Igbotic is not being local, it’s being original. Once someone sees me for my originality, it is not a bad thing, but if the person is trying to insult me, I’ll just be laughing at the person because he or she will surely be confused”

“It was a tough pageant where we had to exhibit lots of creativity and I really appreciated that because it added lots of value in our lives. I met other girls and I am glad that I have a crown to show for my efforts. Being Face of Igbo Heritage Imo Queen is huge to me because Imo is a great state and I will really work hard to have a fruitful reign.

“I am very much interested in kids, especially those in secondary schools because they are the ones who will keep our culture going. I am packaging something with my team; something that will really come out big to make great impact in the lives of these children as well as where it concerns the sustenance of Igbo cultural heritage” she added.

Why I TEACH MATHS LIKE CHURCH SERMON – MATHEMATICS TEACHER