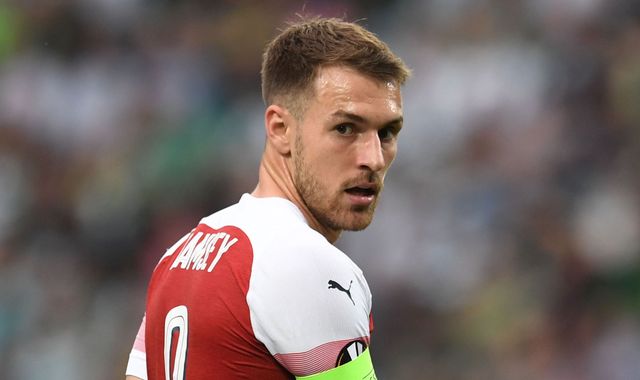 Midfielder, Aaron Ramsey, might have played his last Arsenal game before making his move to his new Italian club, Juventus.

Ramsey is set to join Italian side Juventus after signing a four-year deal with the reigning Serie A champions in February.

Emery was forced to replace Ramsey with Henrikh Mkhitaryan in the first half when the Welshman went down clutching the back of his thigh before limping off the pitch.

4 – @Arsenal's Aaron Ramsey has provided four Premier League assists as a sub this season – no player has ever assisted more from the bench in a single campaign in the competition. Influence. pic.twitter.com/blftPoxGx9

“It’s a muscular injury and usually it is going to mean some weeks outside the team,” Emery said. “I don’t know if we’ll see him again before the end of the season.”

Arsenal, whose 3-0 aggregate win sealed a semi-final tie with Spanish side Valencia, host Crystal Palace in the Premier League on Sunday. (Reporting by Rohith Nair in Bengaluru; Editing by Peter Rutherford )

Afolabi Akindele Is No Longer Our Land Attorney-Efunroye Tinubu Family