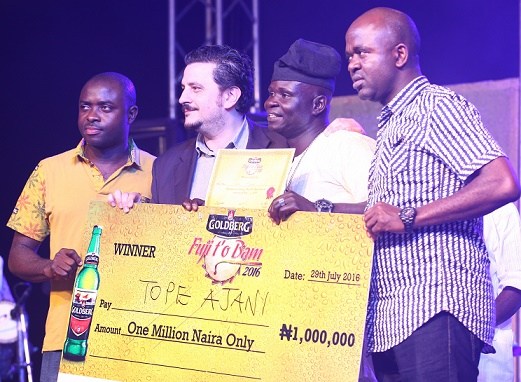 Tope Ajani, a budding Fuji musician based in Akure, Ondo State is set to release his first album after winning the 2016 edition of Goldberg Fuji T’o Bam.

The album, sponsored by Goldberg Lager Beer as part of the prize for clinching the Wura 1 title in the Fuji T’o Bam contest, will be released on Sunday, March 19th 2017 at the SWAN Hotel, Akure, Ondo State.

Funso Ayeni, Senior Brand Manager, Regional Mainstream Brands, Nigerian Breweries Plc, explains that the album launch will reinforce the brand’s commitment to supporting the careers of winners of Fuji T’o Bam by bringing them to the limelight.

An elated Ajani revealed that Goldberg has been instrumental to his success as an upcoming Fuji artist through the recording deal that came with the prize. This he said has enabled him to launch the album. “I feel elated seeing my dreams come true, and I feel grateful to be crowned the Wura 1 of Fuji music under Fuji T’o Bam from which this great opportunity is coming,” he added.

He further explained that his journey in Fuji music which has spanned over a decade has witnessed some ups and downs over the years. However, with the platform of Goldberg Fuji T’o Bam, “I have seen the evidence of a light at the end of the tunnel,” he said.

Ajani, who has been involved in various concerts and activations put together by Goldberg and other private shows since winning the Wura 1 crown expressed his appreciation to Goldberg and Nigerian Breweries Plc and called on other upcoming Fuji acts to leverage on the various talent hunt platforms of the brand.

The album, titled AMBASSADOR, will be a musical reflection of the rich cultural heritage of the Yoruba people through the Fuji genre. Fuji music lovers have been implored to anticipate the album as it will be a significant contribution to the entertainment industry, particularly in the South-West.