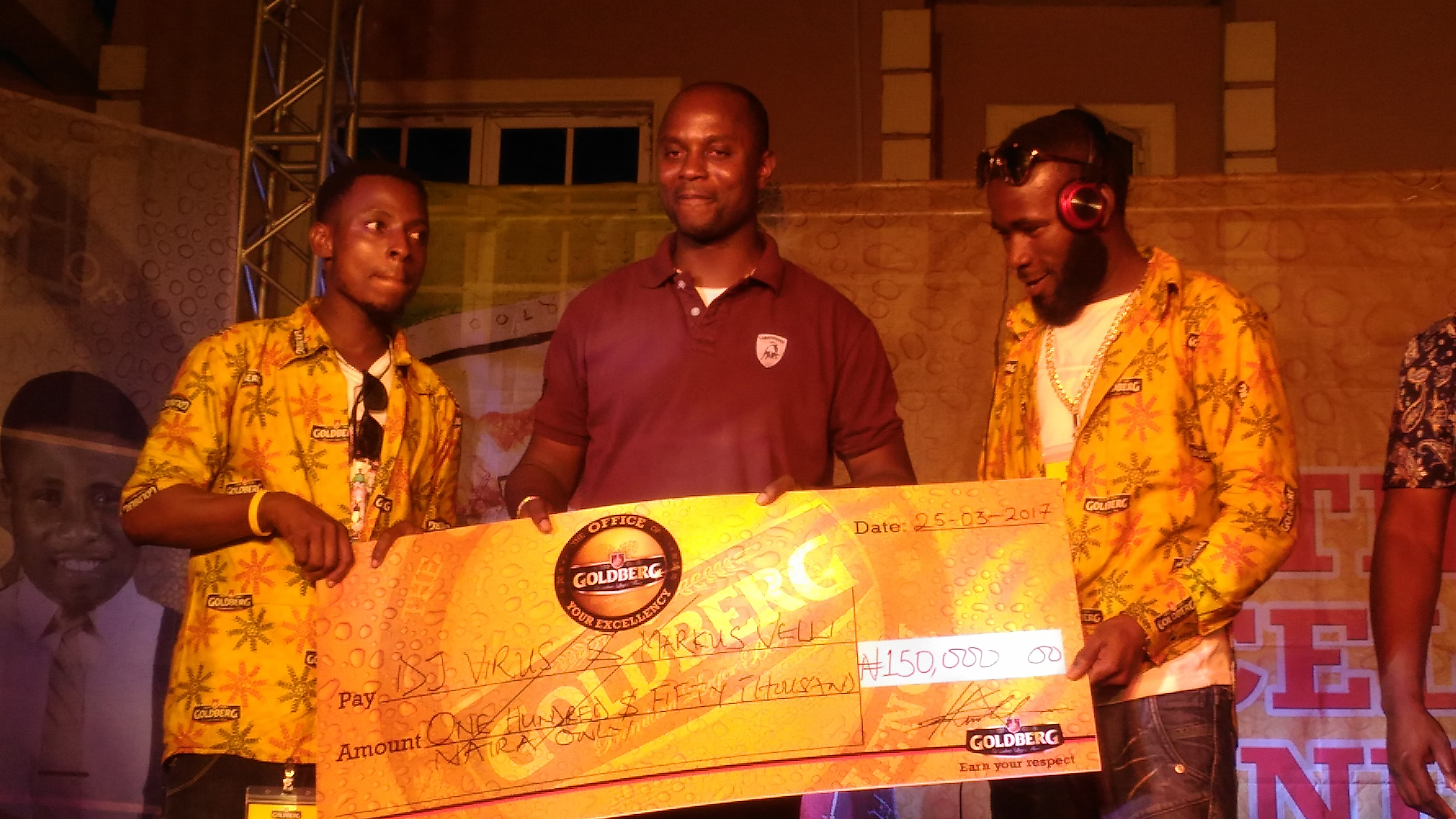 Disc Jockey (DJ)  Kingsley Amhas and Nathaniel Iyayi, a Rapper have emerged winners of the grand prize of Two Hundred and Fifty Thousand Naira (N250,000) in the Goldberg Excellency Tour competition for DJs and free style artistes in Benin City, Edo State.
The competition in Edo languages which was organised by Goldberg, also known as “Your Excellency,” was held at the Play, House, Okhoro road, Benin City, from March 24 to 25, 2017. It was part of efforts at promoting the culture of the people of Edo State in line with Goldberg’s 3-point agenda of culture, respect and enjoyment.
The competition which started with audition of five DJs, thirteen rappers and four singers was later streamlined to five, comprising of a DJ and rapper as a team for the finale on March 25, 2017.
The second position with the cash prize of One Hundred and Fifty Thousand Naira (N150,000) was won by DJ Eze John, nicknamed Viroxz and Markuz Obasehan; while DJ Bright Osaromore and Destiny Okoedo, also known as Black G, claimed the third position and settled for the One Hundred Thousand Naira (N100, 000) on offer for the slot.
The other two teams,  DJ Amandin Osahenrunwen (Amando) and Okungbowa Endurance (Spanky B) as well as DJ Egualeona Daniel and Endurance Isaac got Fifty Thousand Naira (N50,000) each.
Speaking at the finale, the Portfolio Manager, Mainstream Lager and Stout Brands, Nigerian Breweries Plc, Mr. Emmanuel Agu, said the Goldberg Excellency Tour is aimed at promoting the rich culture of the people of Edo State through traditional DJ and Free Styling competition. He said the tour which kicked off in Abeokuta, moved to Ilorin, Ikare Akoko and Ado Ekiti before the edition in Benin City, and that the next place on the agenda is Oyo town in Oyo State.
According to Agu, the Goldberg Excellency Tour is coming on the heels of the unveiling of Goldberg lager beer as “Your Excellency” in 2016 and it is in line with the brand’s unique credentials that position it in a class of its own, away from its peers in the market.
Post Views: 524

Its Four Days To Release Of Ycee’s EP