In spite of apparently being told by U.S. Soccer that she was expected to stand for the national anthem when she represented the national team, Rapinoe once again took a knee, as she had done before a Seattle Reign game on Sept. 5.

Rapinoe had planned to repeat her protest for her next National Women’s Soccer League game at the Washington Spirit on Sept. 7, but the home team decided to play the anthem early before the players left the locker room to prevent her from doing so. On Sept. 11, Rapinoe stood for the anthem when the Reign played the Spirit again, out of deference to the terrorist attacks 15 years earlier. Instead of kneeling, she locked arms with her teammates.

Ahead of Thursday’s game, the USA’s first since its all-time worst performance at the Olympics – a quarterfinal elimination by Sweden on penalties – head coach Jill Ellis told ESPN’s Julie Foudy that Rapinoe had been clearly instructed to stand.

“Megan and I have had several conversations and I completely understand her willingness to try to bring attention to some social issues that are hard,” Ellis said. “But I’ve made sure she understands my perspective and my opinion and my expectation and what’s going to guide me is this is a team-first environment. It is a personal stance within a team environment.”

Ellis then acknowledged Foudy’s assertion that the expectation was that Rapinoe stand.

And if she kneeled anyway? “That’s to be determined,” Ellis said. A “conversation” would follow, she said, and the head coach implied there would likely be follow-up punitive action.

“It warrants a determination,” Ellis said.

But on a night when long-time national teamer Heather O’Reilly said goodbye to the national team after 231 appearances – something U.S. Soccer had tried to leverage to dissuade a protest – Rapinoe knelt. As her fellow bench players stood in front of the dugout for the anthem, Rapinoe took a knee, looking solemn and keeping her lips still as others sang along. 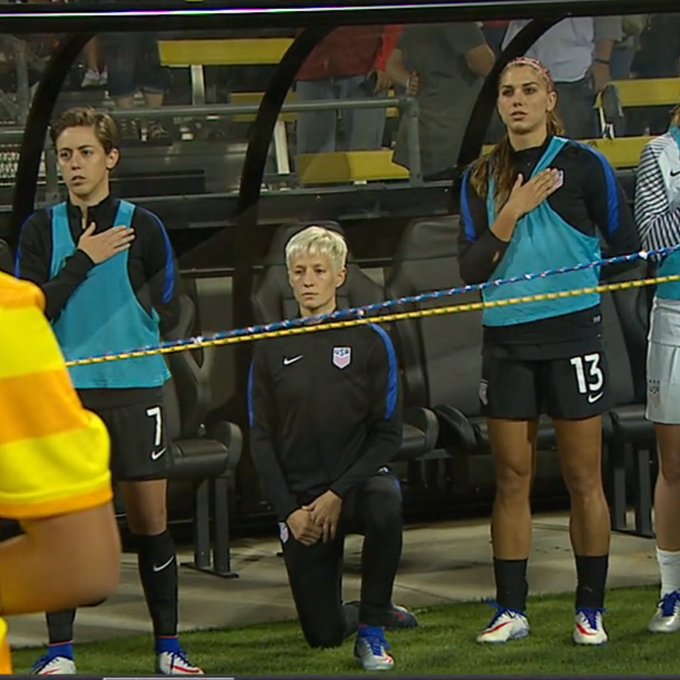 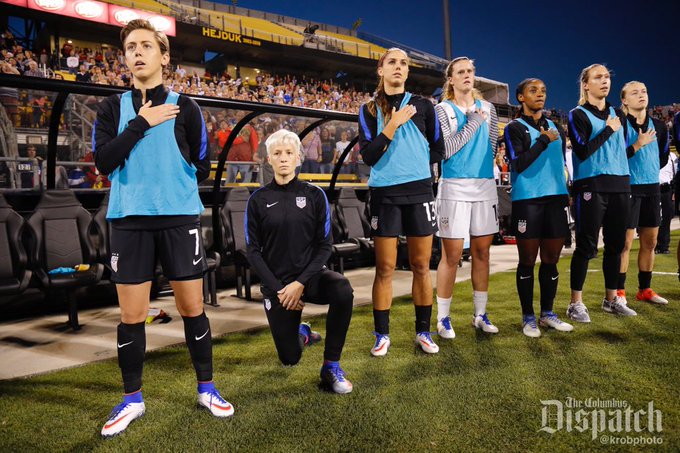 Rapinoe entered the game as a substitute at half-time and got an assist in the 9-0 victory.

Representing your country is a privilege and an honor for any player or coach that is associated with U.S. Soccer’s national teams. Therefore, our national anthem has particular significance for U.S. Soccer. In front of national and often global audiences, the playing of our national anthem is an opportunity for our men’s and women’s national team players and coaches to reflect upon the liberties and freedom we all appreciate in this country. As part of the privilege to represent your country, we have an expectation that our players and coaches will stand and honor our flag while the national anthem is played.

Leander Schaerlaeckens is a soccer columnist for Yahoo Sports. Follow him on Twitter@LeanderAlphabet.