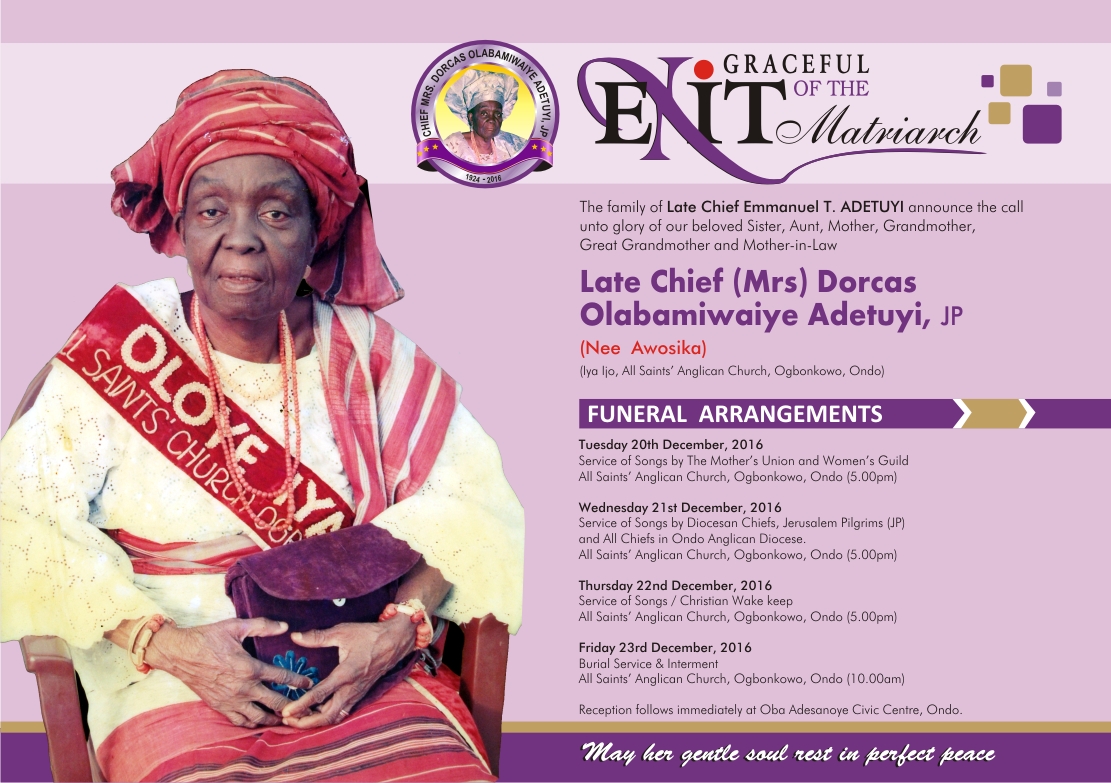 Family members of the late Chief (Mrs.) Dorcas Olabamiwaiye had the opportunity to pay their last respect to her recently.
The remains of the matriarch of the Adetuyi family was laid to rest on Friday, December 23, amidst a colourful reception at the Oba Adesanoye Civic Centre, Ondo.
The deceased, the mother of Dr. Ronke Ogunmakin, a renowned lecturer at the National Open University of Nigeria (NOUN), passed on at the age of 92 at the University College Hospital (UCH), Ibadan, Oyo State 30 minutes after admission.
Prior to her internment, the Iya Ijo, All Saints’ Anglican Church, Ogbonkowo, Ondo was given the special treatment accorded to a woman who served God all through her life.
The deceased was treated to a Service of Songs on Tuesday, December 20th, by The Mother’s Union and Woman’s Guild All Saints’ Anglican Church, Ogbonkowo, Ondo State.
On Wednesday, December 21st another Service of Songs was held by the Diocesan Chief, Jerusalem Pilgrim and All Chiefs in Ondo Anglican Diocese, All Saints’ Anglican Church, Ogbonkowo, Ondo.
Her Christian Wake keep held at Saints’ Anglican Church, Ogbonkowo, Ondo on Thursday, December 22.
On the day of internment, there was no disputing the fact that the deceased lived a fulfilled life.
Chief (Mrs.) Dorcas Olabamiwaye Adetuyi was born on October 15, 1924 into the famous, illustrious Awosika family of Ondo Kingdom. Her father the late Chief Lomafe Josiah Olatunji Awosika was the son of late High Chief Sasere Ayotilerewa Awosika.