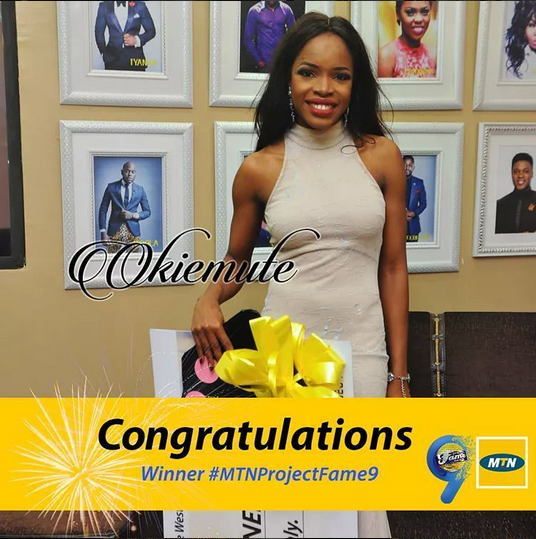 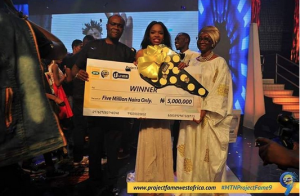 Okiemute Ighorodje is the winner of popular music reality show Project Fame West Africa Season 9. In this interview with us, she talks about winning the contest and life before and after the show.
What was it like when you heard your name announced as the winner of the show?
It was overwhelming. You know that we have been out of the public glare for a while and coming out to receive a lot of love was indeed amazing.
You amazed a lot of people when you asked that your mum pray for you before the climax of the show, what was that about?
My mother’s prayer is very important to me. As a teenager, anything I do I call on my mother for advice and prayers. Whenever I am on the road travelling she always prays for me. Hence, when I saw her in the studio before I was announced winner I just knew that she had to pray for me.
Were you not aware that she was in the studio?
We were not given exclusive details of whom and who were invited and who was going to be present.
Did you imagine yourself as a winner?
If you follow the show properly you will realise that most of the people in the house were talented. So, it never crossed my mind that I could even win. Each time I made the cut I was always grateful to God. I kept telling God to take the wheel.
You are N5million and an SUV richer, will these things change who you are?
Okiemute won’t change, but in relation to my career it means more work.
Prior to now, have you had your hands in music professionally?
I was a member of a band called the Blue Pear Band. The band is based in Port Harcourt.  We have been playing at shows and events.
Is there any likelihood that you would return to the band?
Well, for now, I can’t really say because everything about the nearest future is very uncertain.
As a member of the Blue Pearl Band did you ever think about working on an individual album?
As a member of the band we used to do our own music. At times, we even remix our own songs. So, I have always had it in mind that I would pursue a career as a singer because of my talent. It has always been in front of everything I have done.
Did you have a game-plan when you came into the academy because you never went on probation?
I never had a game-plan. Honestly there was no game-plan. I came into the academy to learn and when I came in I learnt a lot watching from those who came before us. I realised that there was so much in music that I didn’t know. So, basically, my idea was to come and learn.
A lot of people have praised your performance of Phyno’s song titled Fada Fada, how challenging was it?
Like you said it was my second performance of the song. When I did it the first time it was allocated to me as my song for the contest, but the second time was on popular demand. When I was given the song the first time I told my choreographer that I had been given a male song and she advised me to get into character and that I should always put the original artiste and owner of the song in mind. She said it shouldn’t really matter if it’s a male or female song.
Do you hope to outshine those who have won this show before you?
I don’t want to do better than anybody. I just want to carve a niche for myself. The sky is big enough for millions of stars and they don’t even collide, so as far as the sky is big enough I will carve a niche for myself.
With your N5million winning and an SUV you are likely to be distracted from music, what will keep you going?
The Project Fame West Africa platform has taught us that it is more than just music. As a singer you should also have a fall back plan. I can’t say I will stick to music because before I came for this show I was a model. Also bearing in mind that I studied Linguistics and Communication Studies in school I know that there are a lot of things that I could end up doing. Music will just be at the forefront of my career. However, I have not placed anything in place to ensure that I don’t fall out of line. Everything we do is God. Before you do anything it is necessary that you pray and ask Him to take the lead in anything that you are doing.
Post Views: 673

Bigger Things Are Ahead – Ibrahim Okulaja

Evelle Returns With ‘Time To Shine’