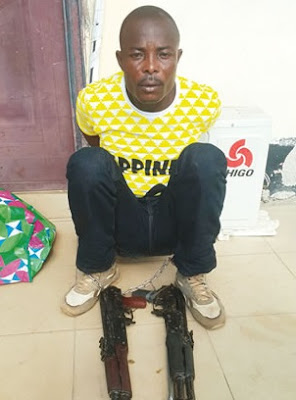 The Nigerian police has arrested a man, Abiodun Amos aka Senti who is one of the leaders of a notorious militant group that operate in Ikorodu and Arepo areas of Lagos and Ogun states for was plotting, with some of his gang members who are currently at large, to bomb the Third Mainland Bridge, Lagos.
According to a statement released by Police Public Relations Officer, Don Awunah, a deputy Commissioner of Police, DCP, the gang leader, Abiodun Amos, said yesterday, that his group planned to bomb the Third Mainland Bridge in Lagos in November because the Federal Government failed to consider its members for amnesty. 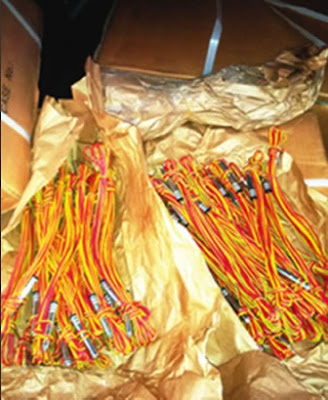 The suspect, Senti, is a 43-year-old native of Arogbo, in Ese-Odo Local Government Area of Ondo State. He was arrested by operatives of the Inspector General of Police Special Intelligence Response Team, IRT,

Amos said they were unable to carry out their plan because he got arrested on November 2, 2016, by the Inspector-General of Police Special Intelligence Response Team, led by Abba Kyari, an Assistant Commissioner of Police.

Amos was apprehended and arrested in a hideout at a river bank in Majidun area of Ikorodu, Lagos, on Monday, where two AK 47 rifles were recovered from him. Two cartons of explosives, with the words Gelatine Dynamite inscribed on them, and detonators, were also recovered from the group’s operational saloon car.
Amos said:

‘’General” Ossy (leader of the gang) said if we don’t blow up the Third Mainland Bridge, government will not listen to us. We had concluded plans to carry out the attack by November ending.

‘’I am the group’s explosives expert and before I was arrested we were going into the creeks to conclude plans on how to carry out the attack.”

“We went into bank robberies and kidnapping because we wanted to get government’s attention and all we wanted was for them to grant us amnesty and also offer us pipeline protection contract. ‘’We have made several appeals but government is not listening to us.

He added that their  kidnapping business ended when it became difficult for its members due to the presence of the military and policemen.

”The principal suspect is an Ijaw man and a Native of Ese Odo LGA of Ondo State. He is an Explosives Expert who specializes in assembling and modifying large scale Improvised Explosives Devices (IED) for terrorist act.

The suspect also volunteered confessional statement to the Police and named other members of the militant group that are still at large.

One of the core suspects of the gang who was mentioned by Amos as the person in possession of their explosive devices and the detonators, was trailed by the Police (IRT) Operatives on the 26th December, 2016 while driving a Toyota Camry Car. The suspect had 2 Cartons of Galantine Dynamite Explosives and 125 Detonators in the boot of the Car in a location in Ikorodu, on his way to connect with the other members of the militant gang to blow up the 3rd mainland bridge. However, when the suspect saw the police, he quickly jumped out of the car and made his escape into a bush.

Fortunately, the huge disaster of blowing up the bridge was averted after the explosive devices and the detonators were recovered by the Police IRT operatives and the Explosive Ordinance Department.”

The leader of the militant group, known as “General” Ossy Ibori, has allegedly coordinated many bank robberies and several high-profile kidnappings, including the kidnap of three school girls at Babington Macaulay Junior Seminary School in Ikorodu; kidnap of four landlords at Isheri North Area of Lagos; abduction of Oniba of Ibaland, Oba Goriola Oseni, among several others crimes.
He also boasted in an interview with Vanguard that his group had over 21 “generals” and had 7,800 battle-ready boys.

He added that the group is rich enough to fight the Federal Government, having acquired thousands of arms and ammunition similar to that of the military.

The police in s statement , said further investigation is being intensified to arrest all the other members of the militant gang still at large.

“Yes, an individual was arrested. On sighting the policemen, the second suspect jumped out of his car and escaped into the bush, abandoning the operational vehicle. ‘’On searching the vehicle, two cartons of Gelatine dynamite explosives and hundreds of detonators were recovered in the boot of the car. Efforts to arrest the remaining gang members are in progress.”

Related Topics:Abiodun Amos aka SentiFace of The Man Who Could Have Blown Third Mainland BridgeslideshowThe Nigerian Police
Up Next

Corruption is in our blood- Nigerian Economist, Sheka