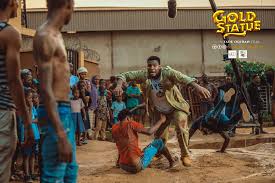 There is no gainsaying that Tade Ogidan is one of the big masquerades of the Nigerian movie industry who does not come to town regularly but whenever he comes, he dances well to the delight of his teeming fans. That is the same great work that has gone into his recently released movie, Gold Statue.

The flick parades Gabriel Afolayan who played the role of Adewale Esho, the son of Richard Mofe Damijo (RMD) and the temperamental screen diva, Sola Shobowale, named Akintade and Grace Esho in the movie. They had a comfortable middle class family based in Lagos.

Interestingly, their son, Adewale Esho, heard from the four-walls of a classroom about a huge gold statue in the city of Ilesha, which happened to be his country home. From his findings, it was part of his ancestral rights resources. He took time to research through his Grandfather and a friend overseas on the location of the statue. Grandpa did not divulge the information but his friend told him and the journey began to get this goldmine.

As a young man who just left school, he was able to leave home on the premise of going for his National Youth Service Corps (NYSC) in Adamawa State but he got his way back to Ilesha. After series of activities, he landed in jail. As the Yoruba saying goes, “Oruko to ba wu ni laa je leyin odi” meaning you can bear any name of choice outside the borders, he changed his name to Samuel Okon, but was lucky to be seen by someone who can identify him.

In fact, this act almost tore the family apart, his mother relocated to the family house in Ilesha just to ensure that he was fine. Eventually, the smart young man, became a force to reckon with in the prison. Thereafter, he was able to recruit fellow prisoners for the great task.

Equally, contemporary songs were used effectively to engage the audience. Tade Ogidan has been described as the Quentin Tarantino of Nigerian movies, and this new flick will put other filmmakers and producers on their toes for another timespan.

Let me leave you with some throbbing questions, what was the outcome of the desperate search for this Gold Statue? Who are the ‘freed guys’ who eventually enjoyed the rewards of the statue? Can there be a single beneficiary of an act of bravery? You have to unravel all these details yourself by visiting the cinema from May 17.