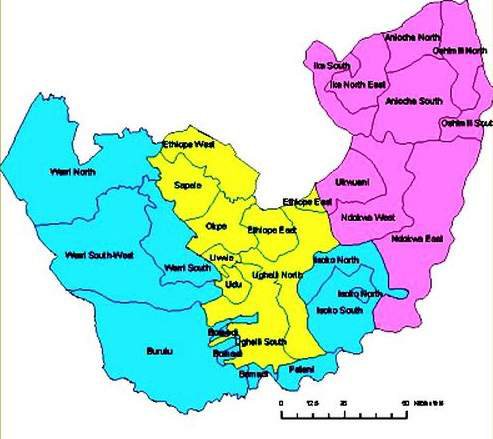 Deltans have never been more apprehensive of their political future like they felt before the 2019 Governorship election. This feeling was occasioned by not only the empty threats from the APC Chairman, Adams Oshomiole on the desire to colonize Delta State but also on what happens in 2023 when the zoning system imposed on the state in 2007 by the then Governor James Ibori expires.  Fair as it appears, this zoning was a mere exercise designed to satisfy the interest of certain individuals, as the only way of hanging on to the corridors of power.
Like as in every good movie that has two ends, the zoning arrangement in Delta State seems to be heading towards a tragic end. What will happen at the end arena remains a matter of prophetic guesswork as many nationalities in the state are beginning to ask the inevitable question ‘How Did we get Here and who is the ultimate beneficiary’ of this so ‘beautiful’ zoning forced down our throat?
There is no doubt that the PDP has remained the political landlord of Delta State having won all the elections so far in the state.

It is also an established fact that the zoning and the PDP have produced excellent leadership in the state. However, there is an emerging school of thought with already established large followership that now questions or view the political arrangement as serving their interest of a select few. This school of thought has its main campus in the Ijaw axis of the state with satellite campuses in Isoko and Ndokwa axis of the state and their students are many. Their grouse, if the zoning arrangement must continue in Delta State, it must continue from the South Senatorial District that houses the Itsekiris, Ijaws, and Isokos.

Their argument is hinged on the premise that by 2023, all the three senatorial districts in the state would have had a taste of the exercise and it will only be fair that the South Senatorial District which has consistently turned in the highest number of votes be allowed to enjoy the highest office which their votes gave to Central and North Senatorial Districts. They argue further that Central Senatorial District has already produced two civilian governors of the state in Chief Felix Ibru and James Ibori. The Ijaws who hold strong to this argument has the sympathy and understanding of the Isokos who feel highly marginalized in the zoning arrangement.
For the Isokos, they have been turned to the wretch of the earth or so they argue. They are vexed by the fact that in this present dispensation, under the government of Okowa, all they have gotten is a miserable office of the Majority Leader of the House of Assembly while the Urhobos who are waiting with smiles for 2023 are gifted with the powerful position of the Speaker of the House, the number three man in the state. The School in Isoko argue that since they have nothing to live for, they would rather work with the Ijaws and Ndokwas to make sure that the next Governor does not come from the urhobo axis as the PDP has not really fared well in urhoboland.
In these cacophonies of arguments, what is evident and sure is that it will not be business as usual in Delta, come 2023 because the Ijaws and Isokos are spoiling fogger the pound of flesh. How the political leaders led by incumbent Governor handle the emerging threat will determine which party wins the next gubernatorial election in Delta State. Until then, the comedy is still loading.
And while the comedy is still loading, it must indeed be a tragic handover story for governor Okowa as party leader in the state to allow the zoning that brought him to office collapse immediately after his tenure, when a simple equitable rejigging of the zoning formula will be all that is required to sustain the party’s winning streak.
The question one must ask is: is it fair for Delta Central Senatorial District to angle for the state’s highest office when it has taken double shot at it while Delta South, undoubtedly the greatest contributor to PDP success in the state has not and remains largely marginalized? Does it make for strategic political permutation for zoning if prime offices are not to be extended to other offices below that of the governor?
One would have expected that if the highest office in the state should elude a senatorial District like Delta South in one breath, some form of balancing must be made not to rub it into their faces by considering their interests in the immediate next offices. What manner of equitable arrangement will consistently serve the interest of one Senatorial District at the expense of others? For instance, Delta Central is primed to produce the state governor in 2023. And it has served as Speaker of the state house already for one term in this closing dispensation with a possibility to run another term ahead of enjoying the chance to produce the state governor in 2023. I find this over pampering of one particular senatorial District completely obtuse because Delta Central if anything, isn’t the only senatorial District in the state. Besides, it has already overshot its chance to produce the state Chief executive even as it’s contributions to winning election in the state does not make it superior to the other two senatorial districts.
It’s hoped that the Governor Okowa and the entire leadership of the PDP would save the party’s winning streak by deploying requisite damage control now before it is too late. Feelers from marginalized Itsekiris, Isoko and Ijaw people are already indicating that unless the PDP as a party engages a proactive gear, the greatest shocker awaits it in 2023 elections. It is certain the zoning arrangement will not receive the nod of Delta South if remedial measures are not taken to correct what approximates to disdainful imbalance in sharing prime offices. Can anyone, for instance, convince Delta South citizens why Delta Central that will produce the governor in 2023, will still be holding the office of Speaker in this dispensation? Does Delta South not have formidable enough lawmakers that can handle the office of House Speaker?
If Delta State PDP  wants to sustain it’s hold in the state in the face of a rampaging APC government at the center, the genuine agitations from Delta South must be given the attention it deserves. Flavours of alliances are already being perceived from very formidable but dissatisfied Political leaders of Itsekiri, Ijaw and Isoko extraction. Any seed of alliance allowed to be planted by such politically sagacious leaders will spell untold trouble for PDP in Delta State. But all of the troubles can be averted now that there is the chance to redistribute offices drawing wisdom from the present imbalance and projected zoning arrangement for 2023.

Related Topics:Delta politics of zoning: The myth and deceitslideshow
Up Next

The quest for vanity (1)

WHY SENATOR ADEMOLA ADELEKE MUST BE JAILED FOR PERJURY AND FORGERY?