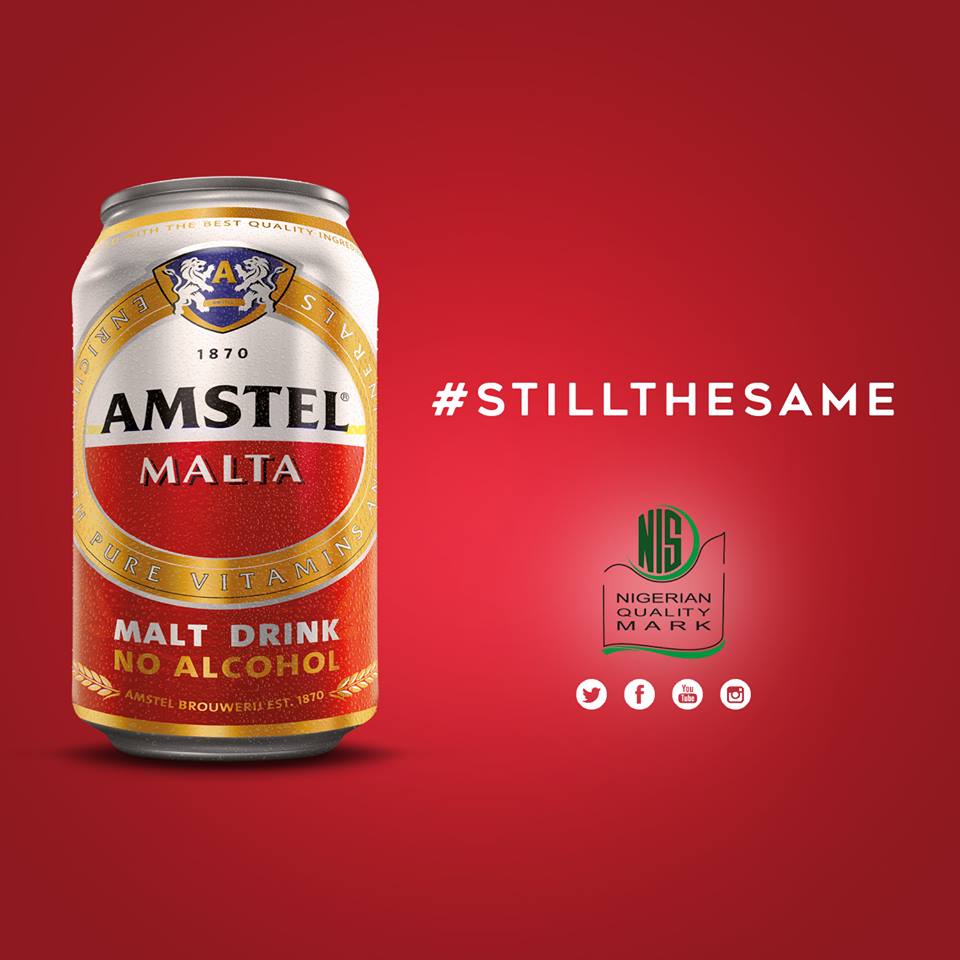 Consumers of Amstel Malta have restated their loyalty to the premium, low sugar formulated malt drink with international heritage from the stable of Nigerian Breweries.

In August last year, Amstel Malta launched credential campaign #WhyAddMore stating that consumers will do more good for themselves if they avoid adding more unnecessarily to what they presently have or enjoy.

The campaign also re-enforced Amstel Malta’s place as the Premium Malt Drink, with an original formulation that contains less sugar and is enriched with vitamins and minerals.

Shortly after the campaign, a picture went viral that a fake version of the Amstel Malta is in circulation. This was because the new packaging wore the new NIS logo while the old packaging had the old NIS logo of the Standard Organisation of Nigeria.

Soon after this, the Nigerian consumers were greeted with another offensive video of an Amstel Malta can drink allegedly containing a strange object. A faceless consumer recorded an alleged contaminated drink and circulated it on social media.

But consumers of the malt drink have denounced the concocted video and described the content as an embarrassment to logic and brand marketing.

Forensic and marketing analysts have also observed that it is very clear that the same source that initially created a video of a purported  ‘fake ’ or ‘original’ but who could not sustain the fabrication is the source responsible  for the current orchestration and poor dramatization of discovery of foreign content.

Analysts and observers agreed that this might be coming from the enemy’s camp as the recording left many gaps to cast a doubt on the genuineness of the video. For instance, the can was opened before the video recording, thus failing the basic test of validity.

Meanwhile, Nigerian Breweries has reported the defamation attempt to the security agencies for further investigation.

However, the Standard Organisation of Nigeria (SON), the statutory body that is vested with the responsibility of standardising and regulating the quality of all products in Nigeria, debunked the claims by a faceless video producer of a fake Amstel Malta in circulation.

Mr. Fred Akingbesote, Deputy Director, who represented the Director General of the organisation, explained to Journalists in Lagos that Nigerian Breweries have met all SON safety and quality requirements and have complied with all requirements of the new National Industrial Standard (NIS) logo.

Related Topics:Amstel MaltaCONSUMERS RESTATE LOYALTY TO AMSTEL MALTA AS PRODUCERS OF CONCOCTED VIDEOS COME UNDER SECURITY SURVEILLANCEslideshowStandard Organisation of Nigeria
Up Next