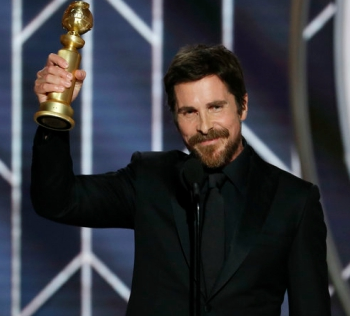 One of the high points of the 76th Golden Globe Award saw  Christian Bale thanking Satan for the inspiration for playing the role of former Vice President Dick Cheney in the movie Vince.

According to Bale, he was inspired by Satan to play the role.

The Hollywood actor was awarded Best Actor at the awards. While accepting his award, Bale said

‘Thank you to Satan for giving me inspiration for playing this role,’ .

Reacting to Bale’s acceptance speech, the Church of Satan wrote on Twitter,

“To us, Satan is a symbol of pride, liberty and individualism, and it serves as an external metaphorical projection of our highest personal potential. As Mr. Bale’s own talent and skill won him the award, this is fitting. Hail Christian! Hail Satan!”

Related Topics:Christian BaleChurch Of Satan Reacts To Christian Bale Award Speech To SatanSatanslideshow
Up Next

How I Ended Up Marrying My Late Husband’s Best Man-Actress, Allwell Ademola Explains