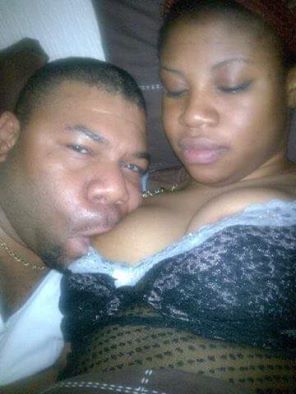 ‘Passion is the evil in adultery. If a man has no opportunity of living with another man’s wife, but if it is obvious for some reason that he would like to do so, and would do so if he could, he is no less guilty than if he was caught in the act’. These words of Saint Augustine, has once again come to the fore, just as the immoral, indecent and obscene picture of a London-based Nigerian socialite, Raymond Taiwo, is buzzing the web. The nauseating picture of Raymond Taiwo, excitingly sucking the breast of a young lady, has now gone viral on the social media. And from the city of London to that of Lagos, many are now talking about the offensive picture, which definitely leaves much to be desired about the moral sanity of Raymond Taiwo, who is married. The picture was simply far from dignifying and debasing for the London-based dude, to say the least. As you are reading this, the startling revelation must be stoking a rather unquenchable fire in his marriage to beautiful Lola Fine Face, a popular fashion designer in Lagos. It’s like a gathering storm in a tea cup for Raymond. How adulterous can a man be!