In Nigeria, betting is considered an influence brought in by the British, her colonial masters. It dates back to the 20s, gaining more prominence in the 50s, 60s, 70s, and 80s via card games, dice and even traditional games such as ‘ayo olopon’.

At a time, it was illegal and associated with miscreants, men considered lazy and others seeking quick cash.

However, its legitimacy came with the pool, a popular kind of betting involving numbers.

In the 70s and 80s, it was common to hear statements such as palm three from four. It was also common to see men sitting in small shops, glaring at old newspapers cuttings.

At other time, boards with numbers meaningless to the average passer-by, but very meaningful to a betting fan were commonplace.

Those were the early days of betting in Nigeria.

Today, what was once considered a vice is now legitimate via several online sports betting and lottery companies.

Unlike in the past when patrons were frowned at by the society, today sports betting has now been accepted, almost totally.

Until recently when the Borno State Governor Kashim Shettima asked betting companies, including the duo of NairaBet and Bet9ja to leave the state as part of his efforts to fight social vices among youths, sports betting was legal in all of the 36 states of Nigeria and Abuja.

Considered by some as a blessing to a country like Nigeria and other third world nations where unemployment looms largely, Obinna Eze, a student of Olabisi Onabanjo University (OOU), who is a regular face at a 9jabet shop located at Ajah Bus Stop, Lagos State explained how important sports betting is to the average youth while speaking with Saturday INDEPENDENT Newspaper.

“Have you been to viewing centers in recent time? If you have, you would have seen boys and men with long sheets of papers occasionally glancing at their stakes once a major incident like a goal is scored in a match. They are seeking extra cash legitimately,” he said.

“Sports betting is important to the average Nigerian youth. It might have been perceived as a vice in the past, but today it is far from that. It is now a legitimate means of income for a lot of people including myself.

“Unlike in the past when young men would rather settle for crime, today they have the opportunity to make good money from betting and avoiding crimes, while supporting their teams and even teams that are not theirs,” Eze told Saturday INDEPENDENT.

“Money is what makes a lot of young people turn to crimes like ‘Yahoo’, but if they know that they can make money legitimately, they will rather do sports betting than turn to crime,” he concluded. 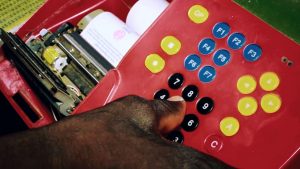 His position is supported by Ola Aina; a mechanic, who was eager to speak with Saturday INDEPENDENT. The mechanic explained that since finishing his training, he has been augmenting with money from sports betting. “At times, I win something big and at other times, it’s just small. I also lose my money at times, but I am not really bothered when I lose because it is just small money like N100 or N200.

“My father is the type that believes that once you have been trained in a vocation he owes you nothing. Having finished my training, I took sports betting, as an additional source of income and it has not been bad.”

Aina went on to say that a lot of people have turned sports betting into their regular job, as all they do is to invest an amount of money and continue to turn it around. “What will they do when they don’t have regular jobs?” he asked.

Asked if he has a football team that he supports, he revealed that “I don’t really have a team I support, but I have had to keep a close tab of developments in different leagues to know how to bet my money.”

A veteran businessman within Lagos metropolis, Joseph Akinbusote, tells an interesting tale of his brother who is doing well today having started what he calls an investment company.

Akinbusote told Saturday INDEPENDENT that his brother, Gerald, started by investing N150,000 on Naira Bet monthly. He revealed that after months of doing this, he became more than comfortable. “At a point, a lot of people thought my brother was into ‘Yahoo’ because he hardly left his home. Indeed, the sports betting industry is a lucrative one.”

Available statistics in Nigeria hardly add up to world recognized growth pattern of 2.5 percent from year to year.

Another report by News Agency of Nigeria (NAN) is quoted to have said that 60 million Nigerians between the ages of 18 and 40 years are involved in active sports betting.

Analytically, that is about 30 percent of the country’s population. These are indeed alarming figures.

Shocking also is the fact that N2 billion is spent on sports betting daily in Nigeria although Ademola Adebajo, head of Gameon, one of the football betting services providers operating in the country puts the daily betting amount at N5 billion or over $25 million.

According to data obtained from the Nigeria Inter-Bank Settlement System (NIBSS), owned by the Central Bank and licensed banks, there were 14 million web payments platforms worth a total of N132 billion ($420 million) in 2016. Transactions leaped to 29 million worth N185 billion in 2017 and in the first quarter of 2018, there were nearly 10 million worth N61 billion.

These statistics might be attractive and may translate into good business for the economy and government, however, there are also unpalatable sides to sports betting, as it is also known to have negative consequences like addiction, loss of savings, idleness and increased crime.

Indeed, not all stories relating to sports betting are palatable; as there are also records of huge losses via betting.

This position is supported by Lanre Gbajabiamila, Director-General of the National Lottery Regulatory Commission, who described the lottery industry as a very risky but also lucrative one.

Akin Martins (not real name) told us how N6million borrowed from his dad went down the drain because he wanted to be an agent of a sports betting company.

Martins revealed that while he set up the company and got patronage, he just couldn’t explain how the capital for the business disappeared after less than a year in business.

This other side of the supposedly lucrative industry has led to questions such as what is responsible for the cult followership which sports betting has gotten in Nigeria.

One factor which has been linked to the rise in the country is the love of sport especially football, explained Tayo Olubayo.

Olubayo, who owns and operates a football viewing center explained to Saturday INDEPENDENT that the fact that Nigeria has the largest followership of European football around the world has caused a chain reaction that has sparked off prosperity in sports betting and associated businesses.

“This crazy football passion is what has been instrumental to sports betting shops springing up in nooks and crannies of the country.

“Betting in these shops continue unabated despite the fact that most of the clubs supported fanatically are abroad.

“Logically, as the clubs gain popularity and become more successful, so too does the amount wagered on the game increases and other businesses surrounding football such as souvenir production, jersey sales, and others increases.”

Findings by Saturday INDEPENDENT also indicate that the high use of mobile phones and the internet also contributes to the increase in access to online contents. 40 percent of Nigerians have access to the internet, while 50 percent have mobile phones, making access to football content easy, thus increasing betting.

General Manager SureBet247, Ajala Adeyinka Samson, however, explains the rise in sports betting thus “I think that first and foremost, this country has been receptive of the benefits that technology can afford us. Like we all know, betting has been in existence in advanced countries for many years and we also are trying to emulate what’s happening in the other parts of the world.

“Now with N100 you have hope that something better can happen. I have seen a lot of people who come here to collect cheques of N7 million, N9 million and much more than that with bets of N200. So, this is giving people hope. And especially for the fact that when they win, they get the money, it stimulates them.”

The simple process of setting up a betting company, a lack of proper regulation and the rush for new opportunities have also contributed to the many sports betting shops springing up.

In Nigeria, to set up a betting company is as simple as establishing any other firm. Asides from obtaining a license which appears, the biggest challenge, every other thing seem regular.

However, the Lagos State Lotteries Board holds a different opinion, as it insists it has been carrying out enforcement and ensuring fair play in the industry.

When Saturday INDEPENDENT visited the Lagos State Lotteries Board, a staff of the board who spoke with us in anonymity, revealed that the board has been trying in its job as a regulator. “We do our enforcement, we suspend lottery companies when they err, and we have even withdrawn some licenses. If we hear that something is happening in Ikorodu, with just the press of some keys, we can know what is happening there. It is not like I am saying we have everything covered, but we are doing well. We also encourage people to report what they see and hear especially issues of underage betting. We have a whistleblowing policy that we take seriously,” he added.

The need to ensure proper monitoring, punishment, and ban where necessary can’t be overemphasized. This is in order to checkmate excesses of the budding industry before they get out of hand.