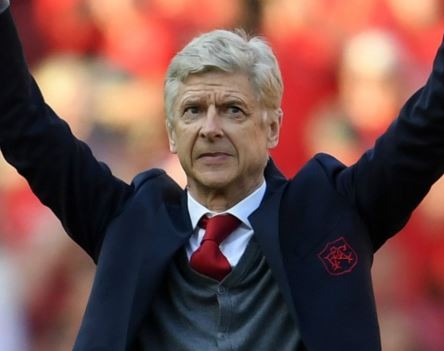 The reign of Arsene Wenger as the boss of Arsenal FC came to an end on Sunday, May 13, as he bowed out of the club after 22 years and 1,235 games.

Wenger, left the club with at Huddersfield. In his post-match interview after Arsenal’s win at Huddersfield, Wenger said: “I had an impact on the club as a whole because the club is in a strong position, it has a new stadium, a new training ground and new players. With the results, we won three Premier League titles, played 49 games unbeaten and I’m very proud to have won seven FA Cups too.”

He also expressed confidence that the new manager that will replace him will be inheriting a good side that can challenge for the league title next season. I see a bright future for my successor because the team has a good attitude and quality. The team needs some additions and if they get them I think they will compete for the Premier League title”.

The 68 year old Frenchman added that “Of course it is very emotional after 1,235 games for the same club. To enjoy it we had to win it (the Huddersfield game), winning football games is what makes me happy and the boys did it. It was a good day for everyone with Huddersfield staying up too. Do I feel relief? Not really, I’m sad. At some stage it has to end, I wish everyone well, the fans have been great until the end and I wish the club well for the future. It will be hard to adjust of course but I will have to deal with that. I want to wish this group of players well and the staff coming in, I will remain an Arsenal fan above everything else.”

Asked whether he will continue to manage and also the standing ovation he got from both sets of Arsenal and Huddersfield fans, Wenger said: “I will stay in football for sure. Whether that is managing or not… I am addicted and I don’t think that can be cured”.

Beauty Essentials that Bring Out the Goddess in You

Family Of Terror: Photo Of Family That Launched Suicide Attacks On Indonesian Churches