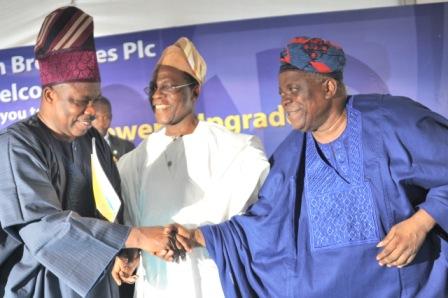 The duo who spoke at the commissioning of the company’s upgraded brewery in Ota, Ogun State enjoined other corporate organisations to follow the fruitful example of Nigerian Breweries Plc.

At the ceremony, Governor Amosun, who was informed by the Chairman of Nigerian Breweries Plc Chief Kola Jamodu, about the successes the company has recorded in terms of its local sourcing and backward integration agenda, specifically commended the company for the local sourcing of over 50% of its raw materials and 95% of its packaging material. According to the governor, “It will be in our collective interest for companies in Ogun state and even the entire country to source their materials locally. Backward integration and import substitution is the master key to a self-sustaining economy”. He promised that the government will continue to provide necessary conditions for business to operate smoothly in the state.

Former President Olusegun Obasanjo, represented by Chief Abraham Idowu Akanle while congratulating the company on the upgrade of the brewery, described the private sector as the engine room of economic growth.  He also called on other corporate organisations to hasten their journey toward the backward integration destination.

While welcoming guests to the occasion, Chief Kola Jamodu, Chairman, Nigerian Breweries Plc, explained that the company has a robust local sourcing programme that has seen it achieve 50 per cent local sourcing for raw materials used in production process. According to him, “our vision is to achieve the 60 per cent local sourcing benchmark for raw materials by 2018 in line with our long term sustainability agenda, ‘Brewing a Better World (BaBW’.” Jamodu added that the progress currently being made in this regard supports Heineken ambition to source 60 percent of its raw materials in Africa locally by 2020.

He disclosed that in 2015, the company made progress in increasing the supply of sorghum used for some of its beverages. “More than 100, 000 tonnes of the cereal were purchased during the year. We also made progress in the commercialization of the new hybrid sorghum varieties – CSR-03H and CSR-04H, which were developed through the intervention of Nigerian Breweries.”

Similarly, the company has since 2015, been working with a local cassava processing company to optimize the cassava value chain in the country by providing industrial quality cassava starch to extract maltose syrup for use in its brewing process.

Ogun state is home to two of the ten operating breweries of the company and also plays host to a myriad of ancillary companies that Nigerian Breweries supports.

See Who Jose Mourinho Wants To Sign At All Cost (Photo)