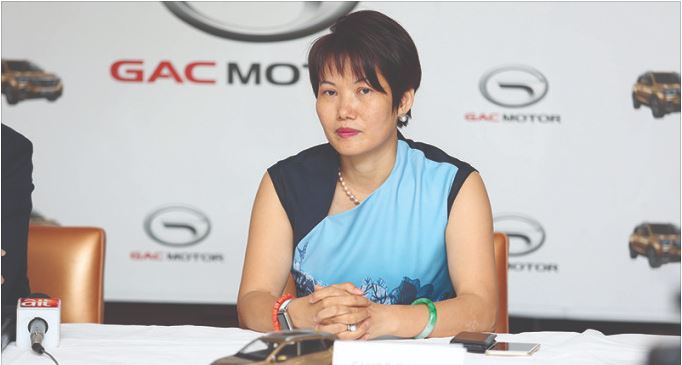 Details Of Her Expensive Gac Motors

Chinese businesswoman, Diana Chen, is in a storm of sort.  The woman of means whose connections cut across several offices in the country including the Ministries of Trade and Investment, Nigerian Investment Promotion Council, Customs is been trailed by unpalatable allegations.

According to information, her skin color probably gives her an edge, making her bulldoze her way into the hearts of men. Her smiles are infectious when she approaches and radiant even before she opens the lips, but behind the smile lies the daggers that has brought a nation to its feet, albeit unknown to the people. Behind the smile is the doom of many men under her employ and in one fell swoop, she terminates their financial destiny.

She’s Diana Chen, the ruthless emperor of CIG Motors, a major importer of the popular GAC Motors in Nigeria. Forceful and daring, she has almost succeeded in making herself the only importer of this brand of car from the Chinese Manufacturers, who are eager to launch into the Nigerian automobile market and push the prices down for almost every home to own a car, but repeatedly met a stiff wall in Diana Chen, who has vowed to make herself the only importer from China, while making others go through the extra miles of importing from other countries at very expensive rates. Who will save Diana Chen from us?

Never in the history of colonialism has this been witnessed. Not even in the era of slave trades were Nigerian Chiefs were allowed to buy slaves for themselves, without the Portuguese and British emperors stopping them, even though they were controlling us with their guns. It was a free market, as long as the Chiefs were capable of buying the slaves and taking care of them.

Diana Chen’s monopoly of GAC Motors from China has every negative effect on the Nigerian economy. We cannot be talking of local economy and allow a foreigner to dictate and determine what happens in our automobile market. God forbid. Not while we live and breathe the air as free sons and daughters of Nigerian. Unless the Federal Government who should immediately shut down CIG Motors for this imperialism mean to tell us that we are Osu in our own lands, and a Chinese Woman now the Lordess.

The continued monopoly of GAC Motors Market b y Diana Chen and her unseen cohorts must end this month. Let heavens fall, but the wings upon which she flies will be broken and thrown to the River Niles. Just as the sky is big enough for every bird to fly, so is the market big enough for everyone to trade. The market is large enough for anyone to import any kind of vehicles, without challenge by another, as long as they have met the legal requirements of our land.

Nigerians must rise up in unity against this Chinese colonialism through the backdoor, caused by one greedy woman, who makes money at our expenses, repatriate the millions of dollars back to China to develop their already developed country, while Nigerians who ought to make the millions, pay taxes that will be used in developing our country is stopped by a foreigner.

Good enough, GAC Motors have indicated interest severally on their willingness to allow Nigerians import the cars, but have repeatedly told us to tell our home government to stop Diana Chen’s influence first. What this means is that there’s simply a cabal that she’s working with, against the interest of the Federal Government, and these cabal must be looked for and dealt with decisively, for sabotaging our economy.

Nigerians, I bring to us a national challenge today, a liberation message and movement that can make every average home in Nigeria own a durable and quality vehicle, with all luxury attached at a very affordable price but currently selling three times the price by Diana Chen in Nigeria, because she’s the only one importing directly from the manufacturers in China, using her Chinese ancestry. We alone can save ourselves from this new found automobile colonialism.

God forbid that it be said of us, that in our time, while we lived, we watched ourselves ripped off by an outsider. May the gods of our lands not frown at us that when the moment of reality stared us, we were cowards and unable to stand up to the exploitation of our resources, when we knew were being cheated in broad daylight.

Diana Chen’s monopoly of GAC Motors importation is the second stage of slavery to us as Nigerians. She wakes up in the middle of the night due to a bad dream or emotional heartbreak and wrecks havoc on Nigerians working for her, by sacking tens of staff the next day, all because of nightmare. She throws unprepared families who have worked for years with her into the labor market, without compensation and payoff. The cycle continues while she rakes in billions of Naira, made by these Nigerian for her.

GAC Motors can be imported by Nigerians from China. No one needs to partner with her to do so. No one needs to be a sub dealer when the manufacturers are ready to sell to others. Who prays to God through a pastor when he or she has access to God? Who goes to see the President through a security guard, when he or she has access to the lovely wife or children? No one will go to Diana Chen to seek her approval for importation. Never, not in our country!

Nigeria is our land, our heritage, our common patrimony, where we will be buried when we die, unlike Diana Chen that will be buried in China when she dies. Therefore, while we live, we must enjoy the benefits of being Nigerians by putting a total full stop to this Diana Chen’s monopoly and allowing Nigerians have access to GAC Motors directly from China and sell to us at the normal rate than the expensive rates she’s currently forcing on us.

We refuse to buy a GAC Motors from Diana Chen for N23 million when the original price if imported from China by Nigerian automobile marketers will sell for N7 million. Our mumu don do. We cannot be exploited on every side. If this act is done in China, the person will be repatriated and banned from entering China to do business. Why then must we allow a foreigner do what can never happen in her country to us?

The current Comptroller General of Customs, Hameed Ali, who is graciously an upright man and hater of corruption must immediately begin investigation into the business of Diana Chen CIG Motors Limited, and stop her from importing cars into the country, till she’s audited and authenticated that all her tax payment is up to date. I’m tempted to believe that she may have evaded tax payments to Nigeria, which should land her in jail.

The Economic and Financial Crimes Commission (EFCC) should spread their dragnet on Diana Chen’s frequent movement out of the country as sources are convinced that she’s into money laundering using her Chinese Nationality and importer of GAC Motors from China to commit the act.

The Buhari Government cannot afford to fail Nigerians by allowing its citizens who have all it takes to trade in GAC Motors from China and give us an assembly plant which Diana Chen has dubiously denied us to be stopped from importing directly from China. The Chinese Ambassador to Nigeria and Representative to the Economic Community of West African States (ECOWAS) Dr. Zhou Pingjian, should be informed of the economic sabotage of its citizen to our country and us a s people. Diana Chen arrogance to Nigerians, by defrauding us for the past five years of a product that should benefit us has to end.

Who will save us from this tyrant and make GAC Motors a free market for Nigerians to import and give us value for our money than the exploiter and colonialist called Dian Chen? You and I alone can save ourselves from her. Just you and I and we can start today, even now, after reading this.

Join the movement of No More Monopoly in Nigeria today.

Fejiro Oliver is Editor In Chief of Secrets Reporters News, Investigative Journalist, Media Consultant and Human Rights Activist can be reached on +2348022050733 (SMS ONLY) or secretsreporters@gmail.com. Engage him on twitter on @fejirooliver86.