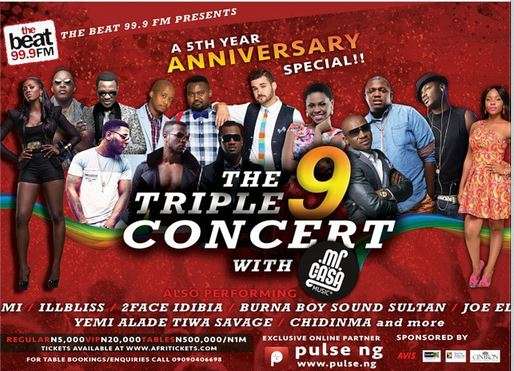 From Christmas concerts to end-of-the-year music spectaculars, Lagos has plenty of great live music to offer this season. Jumia Travel has scoured venue listings and scoped out new artists to bring you the top 8 music shows you really do not want to miss if you are visiting the city this period. All of the city’s best music is right here in our calendar of upcoming concerts in Lagos that definitely offer some extra festive sparkle.

Adored and decried in almost equal measure by all Nigerians – young and old, Juju maestro, King Sunny Ade, steps out flanked by other popular artistes including Onyeka Onyenwu, Iyanya, Terry Apala, Tyson and DJ Jimmy Jatt  in this show due to hold on the 11th of December 2016 at Federal Palace hotel. Expect songs with clever lyrics cloaked in a sweet Yoruba wooziness, but also with occasional acoustic interludes.

Numerous acts from dance to music will invade Freedom Park, Lagos Island for this year-end fest, which has now expanded to two nights: December 16, 2016 To December 17, 2016. Artistes including Tomi Thomas, Seyi Shay, BOJ, Falana, Jinmi Abduls, Kollington Ayinla and Keziah Jones are all confirmed to perform at the event.

Holding at the Federal Palace Hotel on the 20th of December, The Beat 99.9 FM Christmas Concert  will feature West London trio Migos, Krept & Konan & Wstrn! Even more, the artistes will be accompanied by Davido, Phyno, Ice Prince, Patoranking, Burna Boy and many more.

Life is Eazi Lagos: The Concert Party With Mr Eazi and Friends

Kind of “Banku Music” (A subset of Afrobeats), Mr Eazi, will be bringing his  special genre of music  to Lagos on the 21st of December with a concert at Landmark Center, Lagos. As the title of the concert suggests, he will have a couple of other artistes performing alongside him.

One of Nigeria’s most promising artistes Reekado Banks, signed to Mavin Records, will hosting a “Thank You” concert on the December 21st at the Afrika Shrine, Lagos. The concert will be a great way to end the year after a successful album launch earlier this year. Although not confirmed, we expect to see other Mavin also performing alongside the “Katapot” crooner.

For over 10 years, Rhythm Unplugged has consistently brought music to Lagos every December and they are not failing this year either. Come December 23rd, another one of the event will be held at the Eko Convention Centre. A-list artists due to perform at the show include Wizkid, Olamide, Tekno, Falz and many more!

Nigerian multi-instrumentalist, singer-songwriter and composer, known for “alternative soul”  music, Bez  will be serving up a fresh menu of his unique sound with tracks from vault of songs on the 24th of December at Muri Okunola Park. The concert will certainly offer a different kind of setting for Lagosians who are into alternative music.

Olamide a.k.a Baddo remains the familiar name behind most of  insanely popular songs played around Lagos, and he will be hosting another one of his end-of-year fests on Boxing Day, December 26th at the  Eko Convention Center. The hall is sure to be packed full as he also will be dropping his album, The Glory, on same day. You really would not want to miss it.