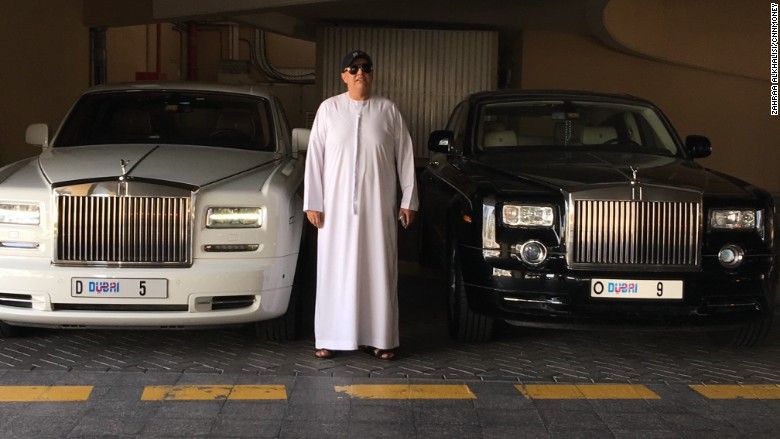 For high-rolling drivers in the United Arab Emirates, no car is complete without a single-digit license plate.

The oil-rich country’s wealthy elite are willing to drop millions of dollars to get their hands on one.

Dubai property developer Balwinder Sahni wanted a highly coveted plate bearing the number 5. He wanted it so much, he bid 33 million dirhams ($9 million) for it at a government auction earlier this month.

It was one of the largest sums ever spent on a license plate, although still lower than the $14 million record set in 2008 by an Abu Dhabi businessman.

Related: The world’s busiest Rolls-Royce dealer is in Abu Dhabi

Sahni found that his big purchase also brought him a lot of attention. He says he can’t go out in public without people stopping him and asking to take a photo — and some aren’t impressed, accusing him of wasting his money.

“It’s hard, people giving comments without knowing the type of person I am,” Sahni told CNNMoney. He described himself as “a simple man.”

The single-digit plates now adorn two of his six Rolls Royce cars. (He also has two more of the luxury vehicles on order.)

It’s also not the first time Sahni has spent serious money on a license plate. He secured a No. 9 plate with a winning bid of 24.5 million dirhams ($6.7 million) at a government auction last year.

Since Dubai has no income tax, Sahni says he sees the hefty license plate purchases as his contribution to the public coffers. He says he believes the money will go to charity and toward improving the city’s infrastructure.

“I believe in giving back,” he said. “This city has given me a lot.”

Dubai’s Roads and Transport Authority declined to comment on how the proceeds from the license plate auctions are spent. The authority holds several a year. Bids can start in the millions of dirhams.

Private companies in the UAE are also trying to cash in on the license plate business. A secondary market where the more sought-after plates are traded has sprung up.

Related: What are the super rich buying? Cars, cars, cars

Abdulkerim Arsanov and his brother set up a website, numbers.ae, to link sellers with buyers. The biggest deal through their website so far was for a two-digit plate that sold for 2.7 million dirhams ($735,000).

“Number plates have become more luxurious than the cars themselves,” Arsanov said.

The brothers started their business two years ago after struggling to find ways to sell their own collection of unique plates. Their website isn’t making them any money yet, but Arsanov hopes to expand it into markets beyond the UAE, like the U.K. and Russia. They plan to start charging for the services at a later stage.

The site usually gets 500 to 800 visitors a day. but the auction where Sahni bid $9 million set off a wave of new interest. More than 8,000 views caused the site to crash and forced the brothers to upgrade their server.

And Sahni’s habit of spending big on license plates could generate extra web traffic for them in the future.

“I always like to give myself a gift every year,” he said. “When you work very hard, you need to present yourself something.”

Back From Inactivity: Schweinsteiger joins first-team training at United

The Supreme Court has delivered its judgment on the application for review of an earlier judgment which sacked David Lyon, as governor-elect of Bayelsa State.

Delivering its judgment, the Supreme Court upheld its sacking of  Lyon who represented the All Progressives Congress (APC) in the gubernatorial election.

It also sacked the deputy governor-elect of the state, Senator Biobarakuma Degi-Eremienyo, while dismissing the application for review of the judgment.

Justice Amina Augie who read the judgment stated that the application lacks merit, adding that the decisions of the court are final.

She added that the applicants failed to point out errors, stating that the judgment is final for all ages.

The apex court judge said the judgment is final in the ‘real sense’ and no court on earth can review the judgment.

“There must be an end to litigation even if we review this judgment, every disaffected litigant will bring similar applications and the finality of Supreme Court judgments will be lost.”

She added that the applications are frivolous and vexatious, and awarded the cost of N10 million against the applicants to be personally paid by their counsel.

Recall that Lyon was sacked by the apex court on February 13, barely 24 hours to his inauguration.

A five-member panel of the apex court led by Justice Mary Odili nullified Lyon’s election on the grounds that his deputy, Biobarakuma Degi-Eremienyo, presented false information to the Independent National Electoral Commission(INEC) to aid his qualification for the November 16 governorship election in State.

Subsequently, the court ordered INEC to declare the party with the highest number of lawful votes and geographical spread the winner of the election. The candidate of the Peoples Democratic Party, Douye Diri, was later sworn in as governor.

This was sequel to a suit filed by the candidate of the Peoples Democratic Party(PDP), Douye Diri, against the APC candidates and INEC, seeking the disqualification of the APC deputy governorship candidate.

Street begging by Almajiri has been banned by the Kano State government.

This is as the Gov. Abdullahi Ganduje-led government tries to sanitise its education system.

The ban was contained in a statement sent to journalists by the governor’s spokesperson, Abba Anwar.

According to Anwar, the move was to fully consolidate the free and compulsory primary and secondary schools education in the state.

Also Read:  For Nigerian Women: 8 things to throw out of your bag when travelling'

Governor Ganduje says defaulters of the new ban will face the full wrath of the law, adding that henceforth, Almajiri teachers must accept the new approach put in place by the state government.

“If almajiri teacher thinks he cannot accept the new policy he has to leave the state,” the statement noted.

Judgement in the applications for a review of an earlier judgement declared in the Bayelsa State gubernatorial election will be given today.

The Supreme Court had earlier received two applications requesting its review of its judgement of February 13.

Recall that the judgment led to the sack of the All Progressives Congress (APC) gubernatorial candidate, David Lyon and saw the appointment of Senator Duoye Diri as governor-elect.

Led by Justice Sylvester Ngwuta, a seven-man panel of the apex court disclosed its readiness to give judgement shortly after hearing the two applications for review of the poll filed by the APC and its governorship candidate at the poll, David Lyon.