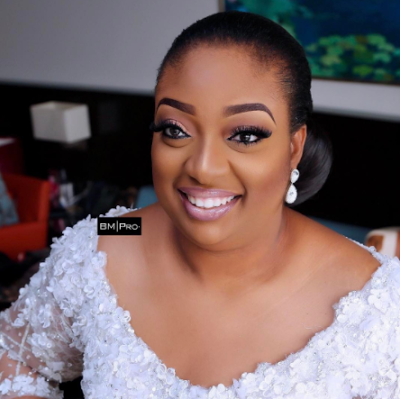 Prior to the ‘White Wedding’ of Olujonwo Obasanjo and Temitope Kessington, there was a skirmish.

Taiwo Obasanjo, an ex-wife of erstwhile President Olusegun Obasanjo and mother of the groom had forecasted a sequence of bad omen for the couple and indeed the country if they got married between Tuesday, May 11 and Saturday, May 13. She even went to court in an attempt to stop them.

However, all those were put aside when the bride and groom who had their introduction in December 2016, stepped out for their white wedding which held at Methodist Church of the Trinity, Tinubu, Lagos on Saturday, May 13.

Gaily dressed, the couple beamed with smiles all through the church and reception ceremonies.

Indeed, the nightmare of an impending doom became a tale of old for Temitope, as she enjoyed the reception which held at Eko Hotels and Suits, Lagos.