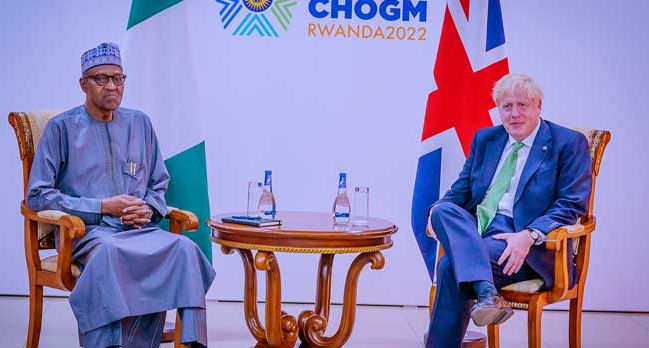 President Muhammadu Buhari has again taken a swipe at former President Olusegun Obasanjo ahead of the 2023 general election.

Speaking at a bilateral meeting with British Prime Minister, Boris Johnson, on the margins of the 26th Commonwealth Heads of Government Meeting (CHOGM) in Kigali, Rwanda, Buhari was asked if he would seek another term in office.

Responding, he reiterated that he won’t be seeking another term in office after the expiration of his second term.

“Another term for me? No! The first person who tried it didn’t end very well,” he said.

In 2006, he sought to extend his tenure beyond the constitutionally-allowed two terms of four years each, thus generating tension in the land at the time.

However, Obasanjo has repeatedly denied he had a plan to spend another four years in office.

In 2012, he was quoted by Channels Television saying; “If I wanted a third term, I know how to go about it. And there is nothing I wanted that God has not given me.”