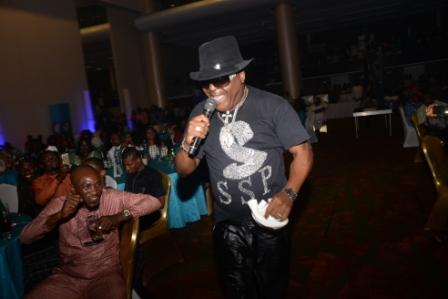 Sir Shina Peters proved his metle over the weekend when he confirmed his place as one of the best entertainers the country has ever known.

The Afro Juju creator had the pleasure of being at his step daughter’s wedding in the United Kingdom.

While dancing, the “Ace” musician fell on the stage. Contrary to expectations that he would be embarrassed, SSP with the help of a guest picked himself up and continued his dancing even with smiles on his face.

The video of the fall was released by fashion stylist, Toyin Lawani on Instagram on Sunday, September 9.

“Fall or no fall you Are A Living Legend Dad @sirshinapeters you came through for my sister , your child , our last born from my mom

to those asking, so he’s my stepdad and for that, I will forevermore grateful, you Are the best dad ever,” she wrote in parts.

Sir Shina Peters is one of the greatest  musician the Nigerian music industry has known.

Having served as a band boy under Chief Ebenezer Obey, he joined General Prince Adekunle’s band from where he learned the strings and moved on to be a solo artist, releasing his first album titled Ace in 1989.

Produced by Laolu Akins, it announced Sir Shina Peters into limelight and several other albums have since followed.

I Am Not An Illiterate, Says Naira Marley