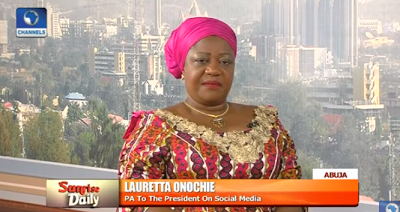 Lauretta Onochie who is the Personal Assistant to President Buhari on Social Media. Below in the last paragraph is her evaluation of singer 2Baba and his anti-government protest.
She said she called for a national debate with 2face Idibia because she wanted him to come and speak clearly on the policies of the present administration he is against. She says she doesn’t want few people to just write something for him to put online which he doesn’t understand
“When I read in the news that 2face is to lead other starts to protest president Buhari’s policies, I looked at the body language and the headline and I thought that there is something not quite right here. Protest policies? What policies because you can’t protest something you are not aware of. So I wanted to be sure that 2face and the people he was leading into the protest, understood what the policies were. So I said to him on social media that protests are acceptable but I want to know, what policies that you are not happy about. Come and tell us on national television. We want to hear him say it. I don’t want a few people to just write something for him or for anybody and they put it on the pages of newspapers. Anybody can do that”she said.
Post Views: 566

Ghana’s Music Influenced That Of Nigeria