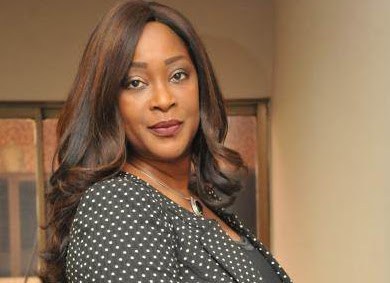 The former Director of Oando Foundation- at Oando Plc – overseeing the corporate communications and services departments as well as coordinating the relationship management function between shared service centres and the various business entities at Oando tied the knot with Akin George Taylor.

The husband of Tokunbo now operates as the financial wizard behind FAFE International, a financial services firm offering amongst other things advisory and consulting solutions with a strong focus on corporate, debt and project finance and wealth management services.

Tokunbo, formerly married to Dele Babade got wedded to Akin George Taylor after ten years of whirlwind romance with a child to the bargain.

The wedding was hugely celebrated.

And checks by societynow.ng revealed marriage has proven a stepping stone to greater heights for Tokunbo.

The beautiful wife of the FAFE International boss has transformed one of the leading lights of the public relations and integrated communications sphere.

Tokunbo achieved as the Managing Director of the Nigeria operation of Hill+Knowlton Strategies, a global public relations company headquartered in New York.

“And her rating has continued to soar since then” a source stated.

Hill+Knowlton Strategies set up shop in Nigeria after securing a multi-market assignment to handle PR duties for Twitter across the Middle East and Africa.

Tokunbo was hired as Managing Director and took charge of the brief and those of P&G, Shell and MasterCard in Nigeria.

“And is doing a good job of being the firm’s Managing Director in Nigeria going by what industry watchers say” societynow.ng learned.

This is said to be in addition to handling the brief of several multinational clients including P&G, Canon, Visa, Cisco, Hogan Lovells, pladis and Lenovo in Nigeria.

“Without taking away any credit from her hard work, that she is moving to greater heights after getting married makes it obvious marriage has been good to Tokunbo George Taylor” a source pointed.

And the former OANDO top shot confirmed this assertion in an interview with Punch Newspaper headlined “Only the paranoid survive”.

Mrs George Taylor stated in the interview that “I have a fantastic support system at home”.