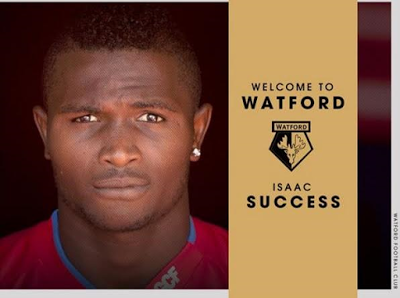 Nigerian player Isaac Success has become Watford’s most expensive signing ever at £12.5million. 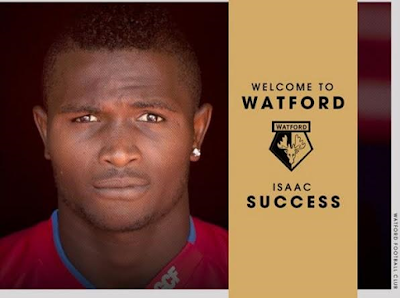 20-year-old Nigerian, Isaac Success, has completed a move to premiership side Watford for a club-record transfer fee of £12.5million. Isaac Success was sold by Spanish side Granada after scoring six goals in 30 La Liga games last season, earning Granada’s Player of the Year award. He will team up with fellow Nigerian striker Odion Ighalo at the Hornets.

Watford wrote on it’s official website; Watford FC is delighted to confirm the signing of Isaac Success for a club record transfer fee.’

‘The highly-rated forward has agreed a five-year contract at Vicarage Road and becomes the Hornets’ third new signing ahead of the 2016/17 Premier League campaign, following Jerome Sinclair and Christian Kabasele. ‘

The 20-year-old, who can play in a central or wide attacking role, moves from Spanish outfit Granada, having attracted interest from some of Europe’s biggest clubs after scoring six goals in 30 La Liga appearances last season.’

‘A Nigerian Under-17 and Under-20 international, Success arrived at Granada in 2014 and went on to play 56 times in all competitions, scoring seven goals.’

Tricks to Get Cheap Flights in this Current Economic Condition

New global research throws out conventions on millennials in the workplace