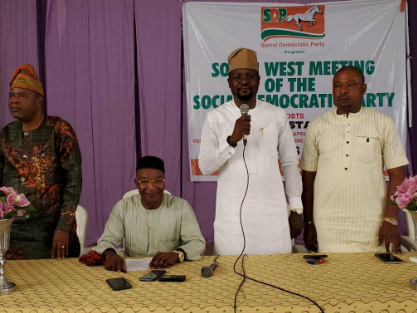 The South-West Leaders of the Social Democratic Party, (SDP) have passed a vote of no confidence on the Party’s National Chairman, Dr. Olu Agunloye, throwing its weight behind his suspension by his ward in Ondo North Local Government.

The party leaders agreed that his alleged involvement in anti-party activities and disregard for the party’s constitution, was not acceptable, which necessitated his suspension.

The Leaders also hailed the endorsement of Alh. Sheu Musa, as the Ag. National Chairman of the party, pending the forthcoming congress of the party.

The Chairman, South-West Leaders, SDP, Mr. Femi Olaniyi described Agunloye as an enemy of the Party, who was rather interested in his personal gains.

Olaniyi who Chairs Lagos SDP, also stated that Agunloye has deliberately frustrated the growth of SDP in Ondo state, such that the membership strength has been reduced.

He however, on behalf of the South-West leadership said, the emergence of Agunloye as the Party’s secretary is unacceptable by South-West members of the Party.

Dr. Sola Agboola, a party stalwart from Ondo state in his words described Agunloye as a political fraudster, who has been suspended long-time in Ondo State, where he hails from.

He stated that Dr. Agunloye’s suspension was based on a letter from his ward (Ward 10) that recommended his suspension from the party over alleged anti-party activities.

“The Social Democratic Party, SDP, South-West caucus is very law-abiding and we are not in support of anyone usurping authority”, he said.

He said Agunloye was fond of using divide and rule style with his position, which gave the party a bad reputation.

commiserated with the people of Oyo kingdom over the demise of their monarch, Oba Lamidi Adeyemi, whose reign the party described as a peaceful one.

In another development, the Party also mourned the demise of the Oyo Monarch, Oba Lamidi Adeyemi describing him as an enterprising and fearless man.

The party also noted that the Monarch in his lifetime was committed to the promotion of the rich Yoruba culture and traditions.