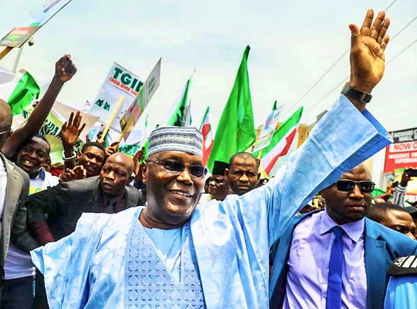 Alhaji Atiku Abubakar, the presidential candidate of the Peoples Democratic Party (PDP), has been condemned by two opposition parties for a recent comment made.

The All Progressives Congress (APC) and the Social Democratic Party (SDP) on Thursday knocked Abubakar, over his vote-for-appointments comments in Abeokuta, Ogun State.

Recall that it was It wearlier reported that Atiku, during a town hall meeting with stakeholders of the PDP in Ogun State on Wednesday, said members who wish to get appointments and contracts in his administration must ensure the party wins in their polling units.

The former vice president said the PDP can only win the presidential election if members work for the party’s victory in their various polling units.

He was quoted to have said, “You are all members of the PDP and supporters of the PDP. You want the PDP to return to power; please, I beg of you, make sure you win your polling booths.

“It is not a qualification that you will get a contract, whether at the local government level, state level, or federal level.”

In a reaction to the comment, the spokesperson of the Tinubu-Shettima Presidential Campaign Council Festus Keyamo (SAN), said Atiku was already promising people contracts in disregarding the Public Procurement Act.

Keyamo, who spoke to The PUNCH, said, “A leopard cannot change its skin. He is already promising contracts to political allies, forgetting that there is a law called the Public Procurement Act.”

On his part, the SDP spokesperson, Rufus Ayenigba, said, “I will leave the decision to the electorate to determine what is best for them. All the leading candidates have relatable histories; there is nothing about Atiku and Tinubu that Nigerians don’t know. For us to move forward, everything is pointing in the direction of a new lease on life. The imperative of a fresh breath to sanitise the system cannot be overemphasised.”

Meanwhile, the Director of the Transition Monitoring Group, Auwal Rafsanjani, said, “There are legal frameworks guiding the appointment and issuance of contracts in Nigeria. Appointments in the civil service are made based on the federal character, for example, every state must have at least one minister, and the same is true of ambassadors.

“If he is referring to the appointment of aides, it is up to him to ensure that he moves the country forward without being accused of lopsidedness. It is in the best interest of the candidates to ensure that whatever they do is in line with the law.”

Related Topics:2023: APC; SDP Condemns Atiku Over ‘No Vote; No Contracts’ RemarksAPCAtiku AbubakarNo Vote No ContractsSDP
Up Next