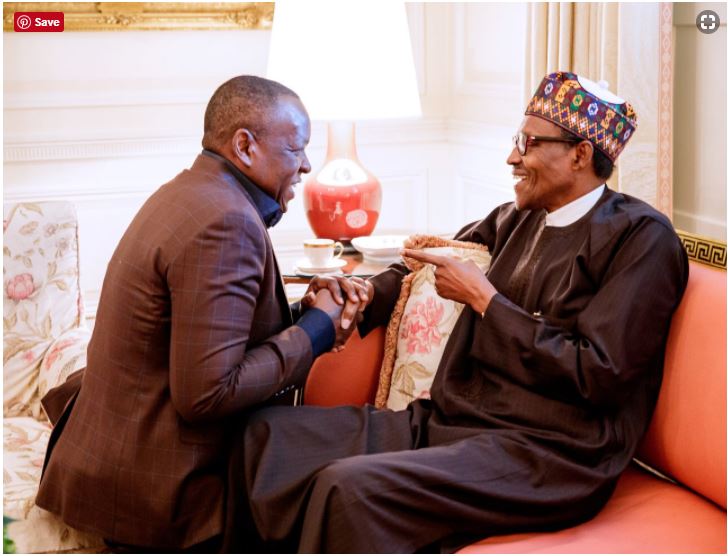 As far as business is concerned, Sahara Energy’s co-founder, Tope Shonubi is no nerd.

Shonubi is well versed in the business of oil and gas among others.

Asides this, the man who co-founded Sahara Energy alongside Tonye Cole and Ade Odunsi knows how to play the politics of the game of business.

Many have said that it is the politics of business that recently saw him groveling for President Muhammadu Buhari in America.

Since pictures of the man knelling for to greet President Buhari at the Blair House, Washington during Buhari’s visit to see the American President, Donald Trump, there have been reactions, as to his move.

Generally, people have said that Shonubi’s move is ploy to attract the attention of the President because he has an agenda to present.

This is not the first time the partners who own Sahara Energy would be making desperate moves to salvage their business interest and protect themselves.

On Friday, June 19, 2015, Tonye Cole was reported to have allegedly visited erstwhile President of Nigeria, Olusegun Obasanjo, and during the meeting, he was said to have allegedly prostrated to Obasanjo in Ogun State, seeking his help in pleading with President Muhammadu Buhari to go easy on them over several deals his company made in connivance with the past government.

Then, Tonye allegedly pleaded with Obasanjo to save them from prosecution and intimidation from the no-nonsense President Buhari.

This allegedly came at the behest of the Economic and Financial Crimes Commission (EFCC) and The Department of State Security (DSS)’s investigation into the crude oil swap programme and the Offshore Processing Agreements (OPAs) involving the Nigerian National Petroleum Corporation (NNPC) and some local oil and gas companies.

The programme was one in which Sahara Energy benefited immensely many thanks to the former petroleum minister, Diezani Alison-Madueke.

Whatever is Shonubi’s agenda now, one fact which remains is that Tope Shonubi is no nerd when it comes to business and its politics.