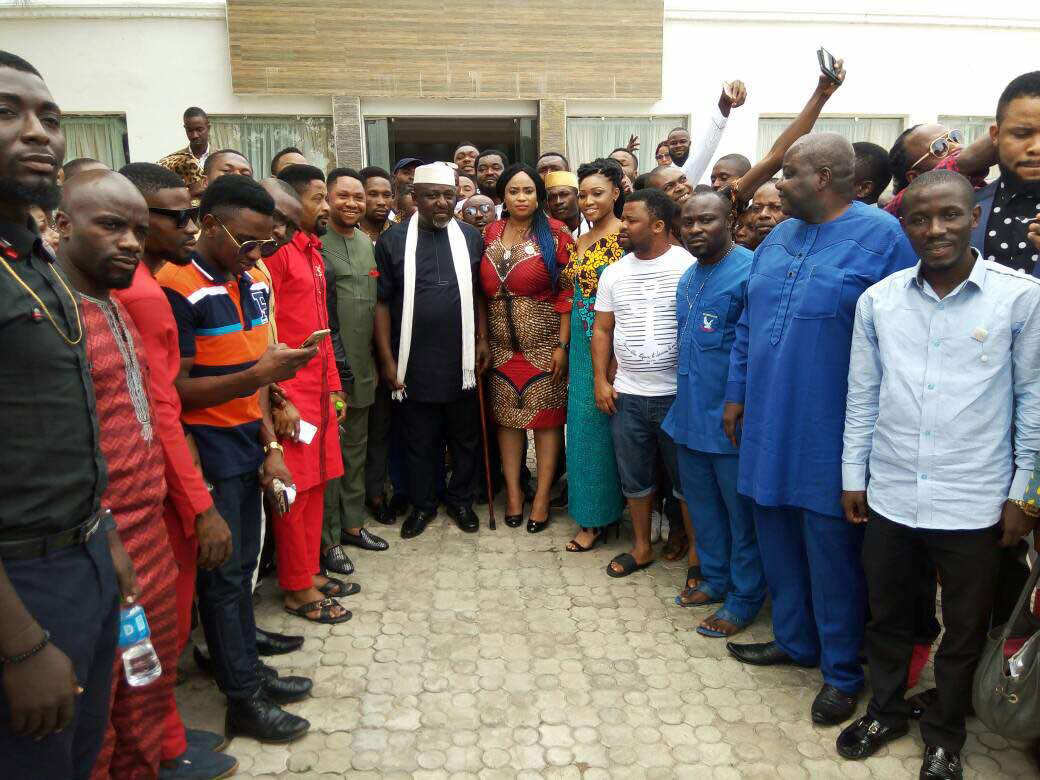 The Imo State Governor Owelle Rochas Okorocha has giving Entertainers in the state the assignment of helping to repackage the state.

Gov. Okorocha who made the call while receiving the artistes who were on a courtesy visit at the Government House Owerri, said the burden of saying good things about the state should not be on the government alone, but on all and sundry.

The entertainers who came under the umbrella of Imo Based Artistes League (IBAL) was led by the Imo State Chapter Chairman of Actors Guild of Nigeria, Chief Mrs Nneoma Ukpabi,

Speaking on behalf of leaders of all other blocs IBAL, Chief Mrs Nneoma Ukpabi  thanked the governor for his magnanimous gestures towards the growth and promotion of the industry in the state, while seeking for more support as well as the creation and constructions of a film village in the state among other requests.

They also passed a vote of confidence on Hon. Chukwunonye Irouno, the Special Assistant on Entertainment to the Governor, calling him a round peg in a round hole in the Governor’s bid to transform entertainment in the state.

Amongst every proposal made by the group, the governor, proposed that it would be better to create Entertainment Commission before the end of his tenure to ensure that issues concerning entertainers are properly handled in the state.

The governor then donated an office complex to the entertainers, promising to do more if they join hands in rebranding of Imo State.

He further urged the artistes to shun negative talks about the state, adding that such will end up scaring people away from the state, because more people in the state means more business for Imolites.

Gov. Rochas Okorocha also enjoined them to join in the fight against illicit drugs in the state, calling on them to  use their arts and skills to educate Imolites on the dangers of taking these banned substances.

DJ Cuppy Continues To Assure Asa Asika Of Her Love