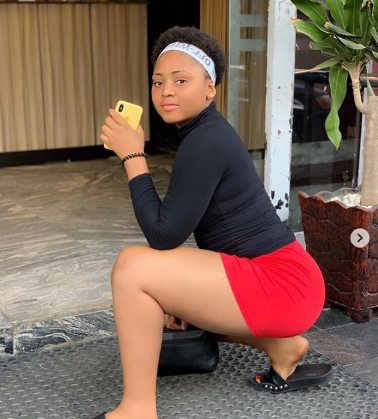 Thespian, Reginald Daniels, is the topic of discussion in Nollywood presently.

Only 19, Daniels has been cleaning out buying exotic cars and a house for his mother.

The actress got herself a second Benz and also got her mum a house all in a space of four weeks.

Working in an industry where the pay is not so lucrative, Nigeria are now questioning her source of income and the number of movies she has actually featured in to have the kind of money that she is spending.

There are also those who have been quick to link her wealth to Atiku Abubakar and her role in his recent election.

Recall that the actress was appointed as Atiku Abubakar’s Youth Campaign Coordinator prior to the 2018 presidential election.

The actress announced her appointment in a post on Instagram where she pledged her support to the People’s Democratic Party, PDP, and the Atikulated campaign.

Reginald Daniels Fires Backs At Those Questioning Her Wealth