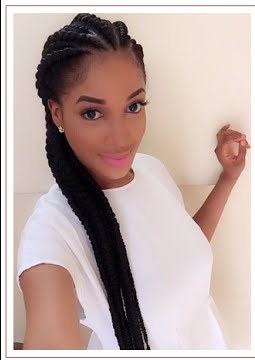 Even Princesses go broke at times. Yes they do. This  is the pity story of beautiful Dabota Lawson, the former wife of furniture merchant, Prince Sunny Aku.

Since parting ways with Prince Aku, Lawson, has not been as buoyant as she used to be. While the lady was with her former husband, she had access to all the things money could buy. She flew abroad at random and took pictures of her stay at exotic hotels and restaurants.

Sharing countless cute pictures from far and wide, a lot of people envied Lawson, as they just couldn’t imagine how lucky she was.

However, those days are far gone, as things are not looking up as they used to for the lady. Lawson recently implied she was not doing too good financially when she revealed a chat she had with skincare expert, Pela Tonye Okiemute.

Revealing that she was sick and had malaria, Lawson revealed how Okiemute gifted her a million Naira and a free spa date describing him as a wonderful brother.

While the money might not be a big deal to Pela, the fact that Lawson revealed that she had began to feel better after receiving the money in her account tells a lot about her financial status.

Highlighting her current position, Lawson said ” Thank you for being a wonderful brother, you contribute to and support every area of my life. Priceless friendship not the one that encourage you to  drink and party with them, gossip senselessly, want you to watch them live the good life but when you are in need can can never be there for you. I love you Pela, i appreciate you. God bless you.” Indeed, these are not the best of times for the Dabota Lawson.