Pastor Laurie Idahosa, wife of Pastor Benson Idahosa, has shared her cancer scare after a worrisome mammogram she underwent in the United States.

Sharing her family’s history with breast cancer, she revealed that she lost both of her grandmothers to breast cancer.

According to her, this happened because it wasn’t detected early enough.

She revealed that doctors found something worrisome on both of her breasts and asked her to come back for a repeat mammogram and an ultrasound of her breasts.

She however disclosed that she went into a prayer mode, praying that whatever they found would be gone by the time she had a repeat test. The cleric revealed that the doctor who reviewed the images thereafter, told her that “whatever was there before is not there now.”

The woman who expressed gratitude to God over the healing, told her female followers to be proactive with their breast health as early detection saves lives.

October is #breastcancerawarenessmonth … before it comes to a close, I would like to remind all ladies (and gentlemen) to conduct regular self breast exams and when possible get an annual mammogram.

I lost both of my grandmothers to breast cancer. Unfortunately, neither of them detected it early enough. By the time they found out they had it, it was already too late, despite the fact that they had mastectomies.

When I was in the US this past summer, I had my annual mammogram. My mammograms have always been perfect…until this year.

This time, they found something worrisome on both breasts and asked me to come back for a repeat mammogram and an ultrasound of my breasts.

Trust me, this is when I went on full-on prayer mode! I prayed earnestly that whatever they found would be gone by the time I had a repeat test. I declared God’s Word over my body and rebuked the spirit of cancer. I prayed as if my life depended on it.

When I went in for the repeat mammogram, the technician took about 10 more images than they took the first time. She took focused images on the places where they had seen some abnormalities.

When she returned to the room, after having the images reviewed by the doctor, she said, “Mrs. Idahosa, today is your lucky day. I have great news for you, it appears that whatever was there before is not there now. You have a great day! Take a deep breath, there is nothing worrisome. We will see you next year.”

I left the office and went to my car and cried tears of gratitude to God. He healed me! I will never have #breastcancer in Jesus Name!

Please be proactive with your breast health. #earlydetectionsaveslives

Note: behind me is the machine that they used for my 2nd set of images. Mammograms aren’t comfortable, but, breast cancer. 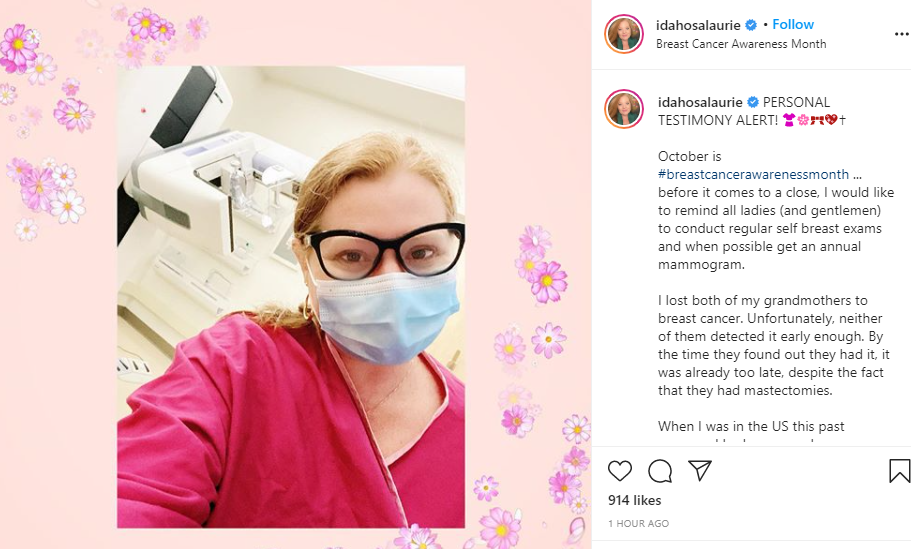 Give Me Same Respect As Ooni Of Ife, Female Monarch Says