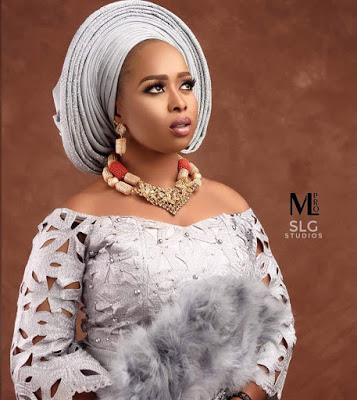 Olori Ajoke
Olori Ajoke, one of the wives of Alaafin of Oyo, Oba Lamidi Olayiwola Adeyemi, has placed a curse on Dublin-based blogger, Esther Aboderin, popularly called Esabod.
This follows a speculation of romance between the recently installed Mayegun of Yorubaland and the Olori.
Reacting to the speculation started by Esabod, Olori Ajoke refuted the claim,  adding she had never met the blogger before. According to her,  her attention  only called to the video making the rounds.

“I didn’t even know about her until someone called my attention to the video she (Esabod) made accusing me of infidelity and I saw so many blogs that had carried the false story.”

Laying curses on herself should the rumours going viral be true, she said:

“May all the gods of Alaafin deal with me if I ever had sex or any untoward relationship with K1.

“I beseech the spirits of dead kings and queens to deal badly with me should the rumour be true but if the accusation aren’t true, may all the curses be that of Esabod and her offspring,” she cursed.

Recall that in a voice note going viral, Esabod pointedly accused the youngest wife of the Alaafin of Oyo, Lamidi Olayiwola Adeyemi III, of having sexual relationship with K1.

As if that was not enough, the Olori was slapped with another rumour of being ejected from the palace over the same issue.

Olori Ajoke: K1 Breaks Silence, Tells Own Side Of Story